Ghost Recon Breakpoint was due to get a new mode and character class this month, but after going silent on the new additions for the last few weeks, publisher Ubisoft has now confirmed the features have been delayed.

In a blog post, the company says the immersive mode and Engineer class, which were due to launch in February, will now be released sometime “this spring”. The team also apologises for its lack of communication with its community – a subject that had been a topic of much displeasure among the game’s fans.

“After careful consideration by our development team, we have decided to move [the mode and class’s] release,” Ubisoft says. “Our objective with the new immersive mode is to provide an impactful update to the game using your feedback as the foundation. The immersive mode is built upon the results of the community survey, your observations gathered by our community managers, and workshops with the Delta Company alongside extensive playtesting. We are in the process of creating an experience that will change the way you are able to play Tom Clancy’s Ghost Recon Breakpoint.

“The complexity of integrating this new mode has proven to be a challenge and we want to ensure that the experience will be a great one when it releases. The immersive mode will still release this Spring, we’ll share more firm timing as soon as we are able. The Engineer class will be released alongside the immersive mode and we are hoping to release Episode 2 with this title update as well.

“We understand that you have been requesting more transparent communication and we aim to provide this whenever possible. There are a lot of moving parts in development which has made locking in dates challenging so we haven’t been able to communicate as much as we would have liked. We apologise for that and will be providing details on these upcoming additions starting early next month.”

As of now, not much is known about the new addition other than it will provide a “more radical and immersive version of Ghost Recon Breakpoint” and a “gritty and authentic military experience”. It had been suggested the mode would remove the maligned tiered loot system introduced in Breakpoint. We’ll find out more with an “intel drop” on March 5. 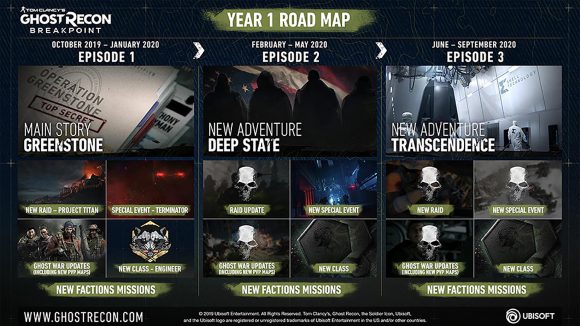 The game launched in October 2019 to a generally poor critical reception, though it maintains a dedicated community of fans. Ubisoft aims to satisfy those fans and attract more players by releasing Years of Episodes – similar to Rainbow Six Siege’s Years and Seasons. Episode 1 began at launch and was due to run until the end of January 2020, when Episode 2 would begin.

That has now been pushed to later this spring; it is due to contain updates to Ghost War and the Project Titan raid, as well as a new special event and another new class. Episode 2 will also bring a new adventure named Deep State, the first hour of which is free for everyone, while the full, five-hour story is available for owners of the Year 1 pass. AI teammates are also scheduled to launch at some point in 2020.