Gigabyte is dipping its toes into the memory market in a couple of new ways. We’ve seen the introduction of new SATA-based SSDs using Toshiba 3rd Gen 3D TLC memory, and now it’s getting in on the DRAM game with a 16GB DDR4 kit using Samsung B-Die memory.

The twin module, 2x 8GB DDR4 Aorus kits use what it widely considered the finest current DRAM chips you can buy, most especially if you’re going to pair them with a Ryzen processor. But, interestingly, even though you only get two sticks of memory Gigabyte is shipping the kit with four modules. So, what gives?

Check out our pick of the best AMD gaming motherboards around today.

Well, it’s all down to the fact that not only is Gigabyte using some fine-ass memory inside its new modules, it’s also added addressable RGB (ARGB) LEDs to the top of them. If only those new Gigabyte SSDs were as pretty… And there’s nothing more distressing for a blinky, flashy light enthusiast than dropping a brightly coloured memory kit into their rig only to have two out of the four DIMM slots left bare.

Urgh, just think of all those ugly pins barely visible in between those sticks of RAM. It really doesn’t bare thinking about, does it?

To combat this unsightly mess Gigabyte is shipping the twin module memory kit with two extra dummy modules to fill out the extra DIMM slots that would otherwise remain empty in a standard size dual-channel motherboard.

Well, not exactly – they don’t have any memory – but you get the idea. 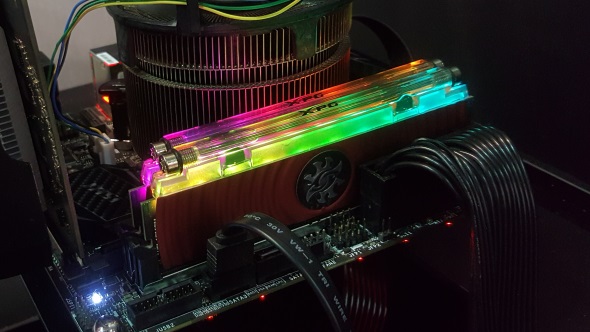 Gigabyte is just testing the water with its new memory kit, but thinks it’s a good time to get into the memory business, especially with the high prices of DRAM at the moment. To be fair that’s why it is just going in with a single 16GB kit to start with. Anything more than that and you talking crazy money and at those prices people are more likely to stick with a known memory brand than a newcomer.

But Gigabyte has chosen wisely and picked the best memory silicon that they could buy and given it a funky heatspreader, some bright LEDs, and a genuinely unique selling point. That’s a rarity when a company is just taking a low risk gamble on a new product line, and it might just pay off.

Fingers crossed it also might mean that memory supply is starting to normalise if Gigabyte has been able to bag itself enough of a supply of Samsung B-Die silicon to make this launch worthwhile.

Of course they’re not the only ones producing ARGB LED RAM (I really struggle not reading that back as “argh! LED RAM!”) as we’ve seen ADATA, G.Skill, PNY, and of course Corsair doing the same. And that’s by no means all the memory manufacturers at the show flashing millions of colours atop their DRAM modules.

In fact ADATA has added water-cooling to the mix with its XPG ARGB memory. I’m not talking about intricately plumbing your sticks of RAM into your liquid chip chilling loop, but the company has placed a reservoir on the topside of their modules, connected to the heatsink on top of the silicon itself, which helps drop the temperature. Not by a lot, admittedly, I believe it was some 5-10%, but at least it adds a nice under-the-sea effect to the RGB LEDs…