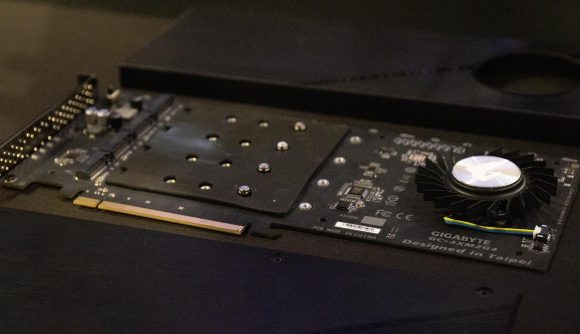 Gigabyte has announced the world’s fastest and largest PCIe 4.0 SSD, the Aorus AIC, during its Aorus Xtreme Power event at Computex 2019. With 8TB of space on a single add-in card, you’ll never have to worry about your Steam library crippling your PC ever again. Oh and did I mention it runs up to 15,000MB/s read and 15,200MB/s write? Damn.

The drive is technically four PCIe 4.0 2TB SSDs weaved together into one GPU-style add-in card that operates across an entire 16x slot. All that flash memory is sure to run hot, so the engineers over at Gigabyte have strapped a blower-style fan shroud onto the drive to keep it running smoothly.

This exuberant drive is made possible by AMD’s just announced X570 platform – the first client desktop motherboard platform to deliver PCIe 4.0 bandwidth. This new standard doubles the bandwidth of PCIe 3.0 traces today allowing for unparalleled storage and I/O capability on AMD compatible boards with the latest chips. Whereas a single x4 PCIe 3.0 connection maxes out at around 4GB/s, a PCIe 4.0 x4 connection manages double that at 8GB/s.

Price is one thing that Gigabyte haven’t yet announced for the monster AIC drive but you can bet 8TB of flash storage won’t come cheap. Like most companies at Computex this year – everyone seems to be catering product towards a booming generation of internet junkies – Gigabyte is touting the AIC drive for content creators, which we all know are flush with YouTube cash… probably.

Something more modest: These are the best SSDs for gaming

And there’s certainly a debate surrounding whether a drive comprised of multiple smaller SSDs should be considered as a single storage drive itself. But if Nvidia can claim the “world’s largest GPU” for a bunch of GPUs strung together via switches and interconnects, I suppose Gigabyte also gets a pass. 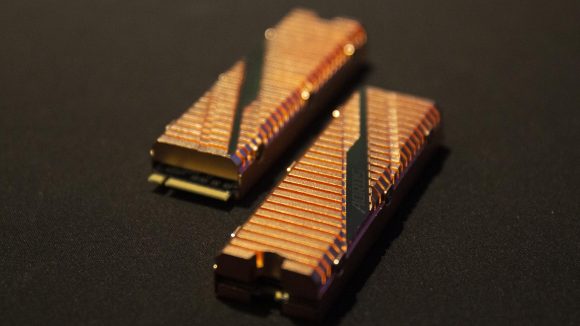 Aorus has already put together a drive using Phison’s PS5016-E16 controller fitted with a weighty copper heatsink that covers both the front and rear of the drive.

AMD’s PCIe 4.0 adoption might be just in time for the NVMe SSD revolution. PCIe SSDs are slowly taking over according to the latest market research, and every day prices are falling to match their slower SATA cousins.