On its face, Gigantic might look like another Overwatch. It’s a shooter-MOBA hybrid featuring an unusual and diverse cast of characters, and it employs a clean-lined, cartoony aesthetic that loosely echoes Blizzard’s offering.

But it would be an injustice to conflate the two, or to regard Gigantic as some kind of “also-ran”. Not only does it operate along very different, more genre-bending lines than Overwatch, but it boasts a pedigree. Gigantic’s lead designer is none other than James Phinney, the designer behind the first StarCraft and Guild Wars.

Gigantic gets its name from the guardians that serve as both mascot and super-unit to each side. While the broad outlines of Gigantic are familiar, as two teams of players capture control points on a map and skirmish with their counterparts, the real point of the game is to charge up — via kills and map control — massive titans who lumber onto the map and have a “Godzilla vs. Mothra” style smackdown.

Each Guardian can only take a few hits from its opposite number, so in a way the Guardians’ charge-up phase divides the game into natural rounds. The first team to charge up their Guardian has effectively won the round… but that’s not the end of the story. As the Guardian takes the field, the other team can mitigate the damage done to their own guardian by mounting an effective defense and scoring kills during the Guardian’s movement across the map.

Between these novel victory conditions and the character design, Gigantic is an interesting “sort-of” arena shooter. The dynamics on the map are those of a MOBA, while the combat blends RPG and shooter elements, with different heroes falling at different places along that spectrum.

It’s a game design that charts the course of Phinney’s own career, from strategy games through RPGs to shooters. Gigantic has its roots in some of Phinney’s own “dream game” ideas from the early days of his career.

“So probably 15 years ago, and then again 10 years ago when I started working on the Guild Wars stuff, I really wanted to do a shooter that had magic and melee in it,” Phinney said during a conversation at PAX East. “I wanted to do a game that brought together the kind of fluid, fast paced very direct kind of gameplay of a shooter, but then have good melee combat in it, and then have the ability to do really interesting character designs in it.” 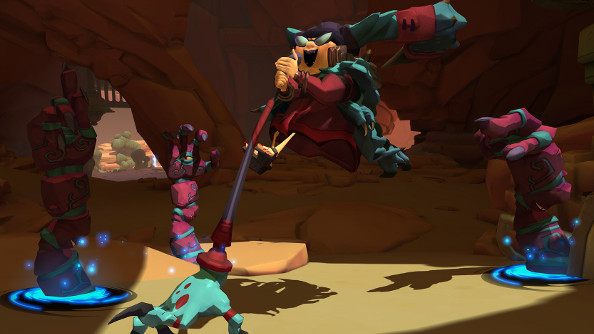 The opportunity never really arose for Phinney at Blizzard or ArenaNet. But a few years ago he fell-in with Motiga, the developer of Gigantic, who were in the process of deciding they wanted to get into development rather than publishing.

“It just crystallized for me. [That design] could totally be that thing. And then it was blending ideas with people who were already on the team, staffing up the team, getting a whole new influx of ideas. But really what we wanted to do was something that had the depth of an RPG, or a MOBA, or a strategy game, but that had the directness of a shooter or action game, and blended a range of different character types.”

I didn’t know much about Gigantic before I saw it at PAX East, and what little I’d seen and heard made me think it was the off-brand Overwatch. I asked Phinney whether he was at all worried about developing a MOBA-influenced shooter / action game at the same time that Blizzard is working on something similar.

“I’m never actually worried about things like that,” Phinney said. “I think the biggest worry for us is mindshare. Will people look at Gigantic? Blizzard comes out with a new game, you’re sort of crazy if you’re not going to take a look at it.” Gigantic has no such built-in appeal.

“But in terms of what our game is, versus what Overwatch is …I think it’s pretty clear that our goals for the games are very different,” he continued. “We’re trying to make a game with a lot of strategic depth and they’re trying to make a very polished and diverse shooter.” 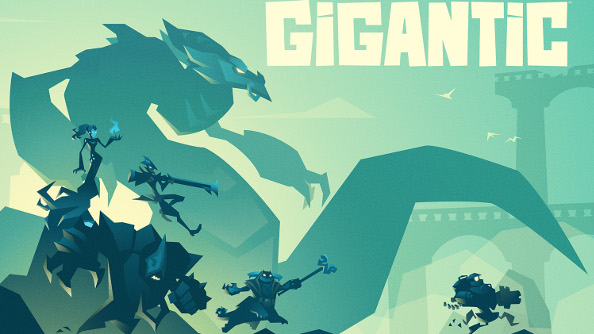 It’s important to Phinney that Gigantic be as interesting on the strategic level as it is on the tactical level and right on down to the individual players and their characters. He doesn’t want to hold players’ hands too much and force Gigantic games to adhere to certain dynamics. Instead, he envisions something that plays out more like an RTS on the strategic level.

“One of the things that’s always been my philosophy doing competitive games — and you can look at StarCraft as an example of it, compared to other [contemporary] RTSes — is the drop play,” he said. “In that, you have the ability to early rush, [or] do drops in somebody’s back line and pressure them from the beginning. In Gigantic, the idea is that that there are battle lines worth controlling, but the game isn’t strictly enforcing them. There’s no, ‘Oh, we all must be fighting here now. This is the only spot that’s open.’ No, it’s your job to defend you backline.”

So while there are positions that promote heavy clashes, like the control points out on the map, there’s no invisible walls that can keep a team from getting cheesed by a lone raider, or to secure a rear control point.

And it does seem to open things up quite a bit. Each character in Gigantic has tons of agency, but also a lot of responsibility. A scout character like Tyto the Swift (who dual wields swords and wears a giant owl mask) can use side-lines to avoid the main battle and start capturing points behind the front line, and to pick of reinforcing players as they respawn. That, in turn, causes a dilemma for the opposing team: how many people need to peel-off and go deal with this “drop play” and how many should keep pushing the front line while the enemy team is one player short? 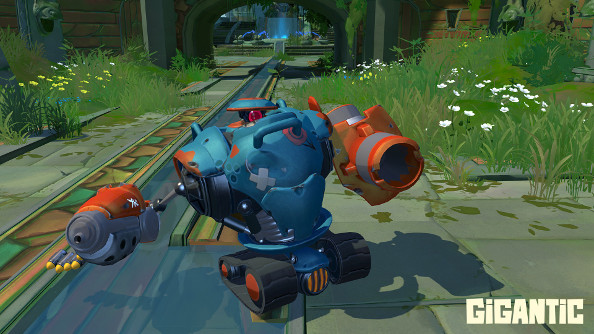 Then there are the choices you can make with your own character, and the things you have to sniff-out about your opponents. As the game progresses, each character unlocks upgrades that can radically change how a character behaves. For example, my tanky robot, HK-206, started out the game with a chaingun primary fire and a railgun secondary, basically giving him the properties of both a turret and a medium-range sniper. But as the game progressed, I had the option of either upgrading my railgun and becoming more of a sniper, or abandoning it altogether for a short-range mortar. Suddenly I had no damage potential outside of fairly close-ranges, but could single-handedly bust a position if I came storming forward. Every character has options for similarly drastic evolutions.

Phinney hopes to add to the game’s depth and appeal with a cast of characters that borrow from a slew of gaming traditions.

“There are characters that are for people who like fighting games, characters for people who can’t aim at all, characters who really want to just focus on the skill interactions,” he said. “We really look at every character that way. What’s the audience for this? Who would enjoy playing this? And then we try to capture this idea.”