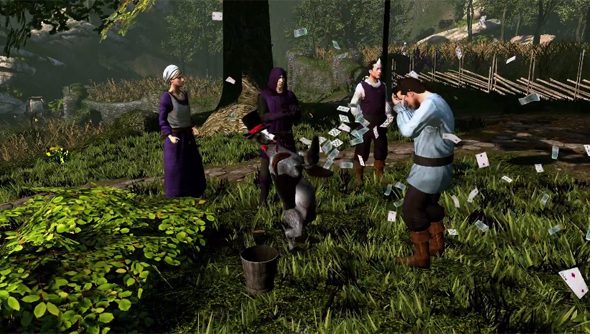 When two chart-topping PC games expand in the space of seven days, it’s a time for gratitude – and gratitude is best expressed through physics-enabled backflips. Coffee Stain have chosen the week of Warlords of Draenor to revisit their bovid adventure, the Pirate Bay-bothering Goat Simulator, and you could hardly call it coincidence.

“If anyone from Blizzard Legal is reading this then please don’t sue, be cool,” said the studio’s Anton Westbergh.

Goat MMO Simulator – or Goat Simulator 1.2, to give it a more pedestrian name – will be released on Steam as free DLC on Thursday, November 20.

Over thirty seconds of hurried footage, our hoofed protagonist is variously spotted spinning a goose on the end of a fishing line; faceplanting a hapless elf; showering NPCs with playing cards before (apparently accidentally) setting them ablaze; reducing a fence to airborne firewood; clipping through terrain while pulling a cart.

By way of monsters, expect murloc-riffing bipedal fish, angry agricultural equipment and at least one dinosaur.

“The problem is that it’s actually not as terrible as you might expect,” said our Tim in his Goat Simulator review. Have you encountered the same issue?