If you’d rather play a good RTS, check out our list of the best strategy games on PC.

Godus Wars is, ostensibly, a real-time strategy game with god sim elements set in the ‘Godus universe’. But at this stage of development, it’s barely an RTS, there are hardly any god sim elements, and the universe it’s set in has yet to knock out a single finished PC game. Off to a troubling start, then. 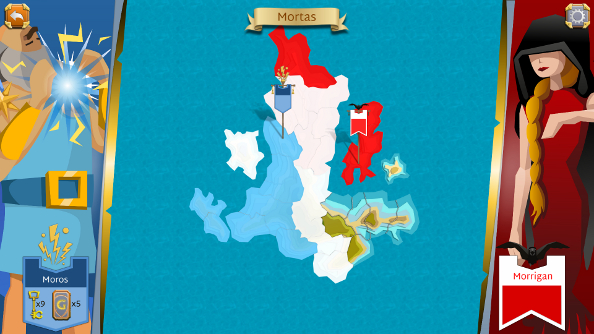 You are a deity! You lucky, lucky person. And as a deity, you must fight other deities for control over the world. This means conquering a continent, and then conquering another continent, until all of the regions of the world are dominated by you and you alone.

The original Godus was meant to have much of this in it, but for some reason 22cans was never able to make conflict work, subsequently scrapping it. Now it’s been spun off into an entirely different and separate game. And it looks like the studio is still struggling to make it work.

Each battle has a main goal: take over the opposing faction’s giant silo filled with pink goo. Apparently it’s a building that contains the belief generated by the god’s followers. You do this by watching as followers automatically build abodes, wait as those abodes generate belief, and then spend that belief on constructing a citadel, which produces troops, as well as spending it on god powers that come from cards won in previous battles. If you get tired of waiting, you can click on trees and rocks over and over again to generate more belief. 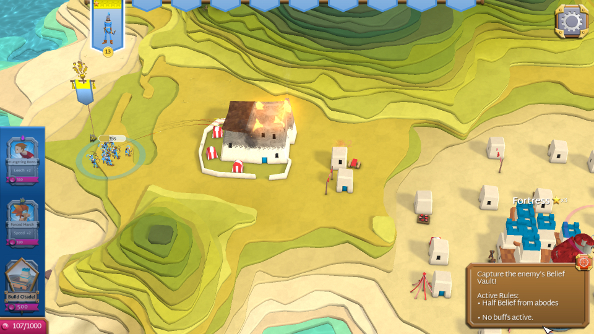 There is a lot of watching and waiting. A huge amount. It’s the first and last thing you’ll do in each battle, and you’ll do plenty of it between those points as well. What I’m saying is: Godus Wars is painfully dull. It’s slow and boring and I’m confess that I’m glad I’m not playing it right now. I could, though. I could write this whole review while playing Godus Wars because there’s so little to do.

22cans seems to have fundamentally misunderstood not only what makes an RTS fun, but what makes an RTS… well, an RTS. There’s very little management, not much to do in battle but watch tiny men kill other tiny men, and simply not much need for strategy. It’s completely absent important or meaningful decisions. You need patience and a little luck to win, and that’s it.

That luck comes in two forms. There’s the luck of the draw, as each battle has a randomly selected rule that might screw you over, help you out, or seemingly do bugger all. It could have been – and maybe will become – an interesting wrinkle, but right now it tends to either make the already dismally simple game even easier, or it just makes battles painfully long. 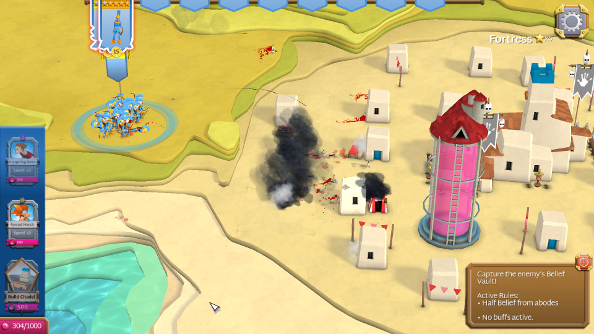 If, for instance, you are lucky and get a rule that means your abodes generate double the amount of belief, then you can build a citadel almost immediately, rapidly recruit your first unit, and send it to capture the enemy belief silo before they can even defend themselves. But if you get the rule that halves your belief, then you’ll just have to sit and wait. You’ll probably still win the fight – the enemy AI is appallingly conservative – but it will take perhaps double the length of time. Each battle is at least extremely short, but when they are this uninvolved, any extra time added to them merely makes the tedium even less bearable.

It’s frustrating because there are actually some compelling, if not wholly original, ideas peppering the game. The cards are a nice touch, giving players something to actually spend belief on, while also adding a layer of strategy – a lightweight one, admittedly – to the mostly hands-off proceedings. Using a card might give soldiers a speed boost, empower them, or slow down enemies. Some are passive and don’t need to be activated, but are one-shots, giving players a bonus to their starting belief or increasing the size of the belief pool. You pick your cards at the start of each god brawl, selecting up to 4 .

Then there is, I suppose, the bit that makes 22cans think that the game is part god sim: you can fiddle around with the terrain, just like in the original Godus. You might want to flatten it to make room for your citadel, expand a grassy area so better abodes will be constructed there, create a land bridge to get you to the enemy village faster, or raise the terrain to give your army a height advantage in battle. 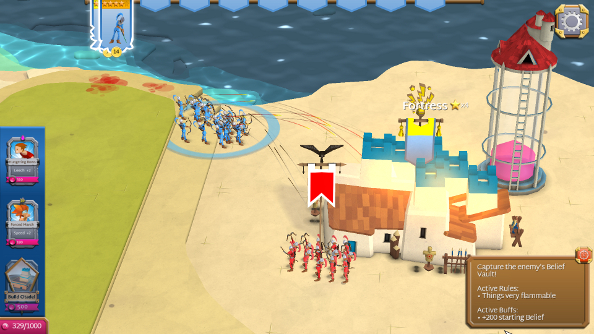 Unfortunately, manipulating the terrain is a chore. It’s imprecise and fiddly and continues the series’ legacy of forcing the player to click far more than should be necessary. You’ll drag some terrain a bit, and then have to stop, and then drag another bit of terrain that’s below or above, making slight, incremental changes. Sometimes nothing will happen at all, or the wrong bit of terrain will get expanded, because the game doesn’t really know what bit of land you’re trying to click on.

This lack of precision and barrage of clicking runs throughout the game, lamentably, and makes controlling the only thing you can control, your troops, just awful. Command them to attack an enemy, and they might just attack the building next to them instead. Tell them to capture that goo silo, and they’re just as likely to move next to it and do nothing at all. On the subject of moving, that’s something they struggle with too. The unit pathfinding in Godus Wars is utterly abysmal, not helped by the fact that most of the world is made up from tiny steps rather than slopes. You’ll have to sit there as your soldiers hop around like drunks, getting lost, stuck and confused.

I can’t imagine who Godus Wars is for at the moment. I don’t think it’s for RTS fans, and I don’t even think it’s for PC gamers. Peter Molyneux has said that there is no mobile version this time around and that the focus is entirely on PC, but I just don’t see a PC game here. It’s paper thin with short and simple battles, and once 22cans sorts out the broken pathfinding and lack of precision, it might become the sort of game that would provide a very brief diversion when you’re on the bus or on a lunch break. 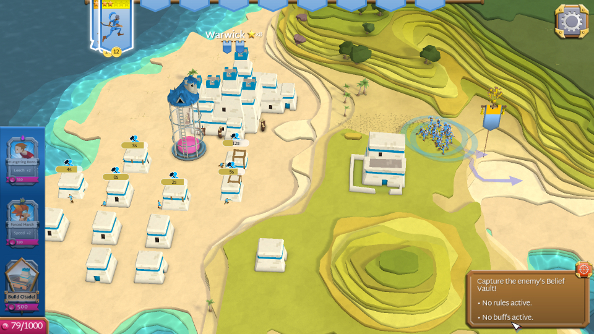 Early Access games really should be at least somewhat transparent, and there’s none of that here either. Ignoring for a moment just how shifty it is to replace the Godus store page with a Godus Wars one, thus removing all of the Steam reviews (and it seems to have skipped the Steam Greenlight process), 22cans have also locked the Steam forums, leaving only official, pinned posts. Now, it could be argued that, thanks to Godus and Molyneux’s reputation, the forums would become a cesspit of toxicity, but it’s also where players go to share feedback, ask and answer questions, and participate in the Early Access process, which includes discussion. Now they can’t. There isn’t an official 22cans forum for the game, either.

Aside from all of that, I simply don’t think that investing in 22cans by purchasing another one of their Early Access games is a good idea. Their last game, regardless of how proud they are of the mobile version, was a failure on PC and will seemingly never be properly finished, and there’s no reason to throw money at yet another risky proposition, especially one that until today still had in-game microtransactions. At least wait until it’s complete, if that happens this time.

Wait (or just forget about it)