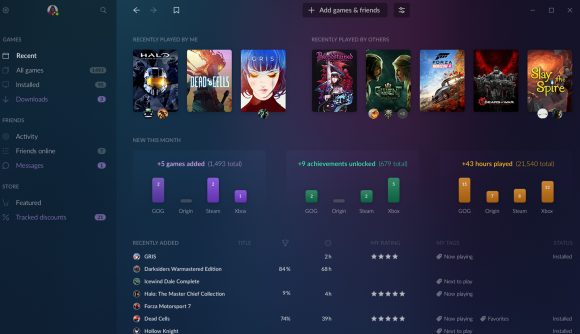 CD Projekt has big plans to expand the GOG client beyond just serving as a launcher for its offering of DRM-free games (including many of the best old games on PC), and last month the company detailed GOG Galaxy 2.0 – a single application intended to unify your game library across every PC launcher and console platform. Today, the publisher has begun sending out closed beta invites for the client.

Beta invites are going out on a “first come first serve” basis, so you may have to wait a bit before you can get in. (Anecdotally, I signed up day one on my personal account for access and haven’t gotten the invite yet, so practice patience.) If you haven’t signed up yet, you can put your email address on the list via the official website.

As of this launch, GOG Galaxy 2.0 offers integration for Steam, Uplay, Epic, Origin, Battle.net, the Windows Store, Xbox Live, and PlayStation Network, bringing in supported data ranging from achievements to hours played. You can launch PC games directly through the client, though you’ll obviously have to hit up your console to play those titles. GOG developers are working to bring as much official platform support as they can, but open-source community integrations will allow users to expand platform support.

Features like cloud saves and auto-updates will still require the original clients to be running. Eventually, the client will include a centralised friends list, cross-platform chat features, and discovery options to make finding new games easier.

You’ll also be able to include individual games outside of specific platforms, and you’ll be able to adjust your library view through custom tags, filters, and sorting options. The library function will also let you import background and game cover images for stuff that isn’t covered by the existing platform integrations.

GOG says “we don’t share any data with third parties,” and promises that you’ll be able to delete any platform integration and collected data from GOG’s servers with the push of a button.

Programs like Playnite have already offered similar features on PC – even Steam has modest support for imported games – but GOG Galaxy 2.0 sounds like a much more ambitious attempt at library tracking.