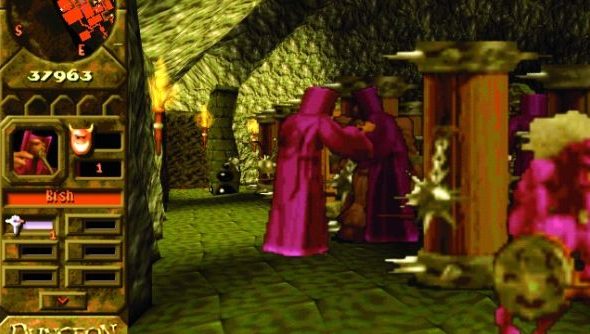 The digital retailer formerly known as Good Old Games have today gone some way to justifying all the office time they evidently spend tending to Twitter feeds and trawling news websites like this one. Just as furore over EA and Mythic’s free-to-play mobile Dungeon Keeper has reached its anti-choral peak, they’ve made the original game free – not only to play, but also to download as .exe and keep on your PC in its entirety forever.

“Today of all days, a good part of the world celebrates love in all shapes, sizes, and flavors,” write an uncharacteristically saccharine GOG. “For us at GOG.com, there is no greater love than the love of classic PC games. We love them, you love them, and you know what? We love you as well!”

Dungeon Keeper Gold comes with the Deeper Dungeons expansion, and is free for the next 43 hours or so. Existing owners can alternatively grab a gift-code for a friend or “significant other” – and hope they don’t keep an eye on websites like this one.

Mr Molyneux himself condemned nu-Dungeon Keeper last week for its frownsome pacing, and fans were quick to hail this giveaway as a maroon middle-finger to EA earlier today. But as GOG themselves just as quickly pointed out, EA are Dungeon Keeper’s rightholders – and you don’t get to hand out unlimited copies of their games without their say-so.

Does that make EA uproar-profiteers? Are they seeding a new generation of Dungeon Keeper players, ready to become disappointed customers of the iOS demake a couple of months down the line? Maybe. But they’re not asking directly for anything in return for a copy of one of Molyneux’s best, besides a GOG account – which you most likely already have.

Worth a click or two, surely? Once you’re done there, our Nick recommends the KeeperFX mod – which ups resolutions and textures while retaining the spirit of the game’s original sprites.