In June Google will halt the advertising of cryptocurrency related services and products across the Google platforms. It’s a measure seemingly designed to limit volatile, risky investment opportunities appearing on their network.

Check out the best graphics cards on the market. They might even start to get cheaper soon…

The announcement was made in a March 2018 Financial Services policy post. It means that a wide variety of cryptocurrency related products will be restricted from advertising via the vast Google ads network from June onwards. And it’s not just the exchanges which will be hit by this ban either.

This follows a move in January which saw Facebook banning ads promoting cryptocurrencies, ICOs, and exchanges from their own network.

And this is all good news for us PC gamers who have seen our favourite component, the graphics card, become both frustratingly rare and unfeasibly expensive. Following the Google announcement the crypto-markets have seen a modest drop in price, and it wouldn’t be surprising to see an even bigger drop when the ad-block comes into force in June. 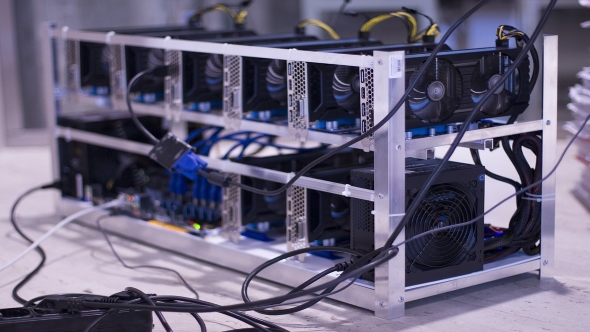 That might ease the rabid demand for our graphics cards (they are ours – they’re made for gamering, not minering, damn you) and hopefully allow stock to return to vaguely normal levels in the shops. The ad-block and subsequent drop in the value of cryptocurrencies could stop the nefarious folk speculating on the price of graphics cards – especially if the second-hand market starts to see an influx of rehabilitated mining GPUs.

With the supply and demand issues ironed out pricing would return to somewhere near normal levels and we can start upgrading and building gaming PCs again. Yay. Hopefully…

We’ve been worrying for the future of PC gaming with the crypto-miners suddenly pricing many PC gamers out of the market, and making the Xbox One X suddenly look like a great value mini PC. Sad times. It’s already partly to blame for the stagnation of the GPU industry, with neither AMD or Nvidia needing to innovate when every single performance graphics card being made is snapped up almost immediately.

If the unsatisfied GPU demand of the crypto-miners carried on then it wouldn’t matter what the graphics card makers did – and we’re positive creating dedicated mining graphics cards won’t help – there wouldn’t be enough made to sate the miners nor the gamers. And that would mean prices remaining high, or possibly rising, and then potentially constricting the PC gaming market in a massive way.

Thank the Brin that Google are here to save us.