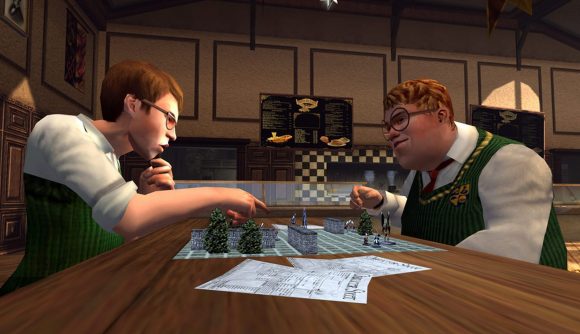 While Rockstar’s biggest games, like Grand Theft Auto and Red Dead Redemption, have seen no shortage of success over the past decade, the high school drama Bully has been a cult favourite since it launched in 2006. Players have desperately been looking for confirmation of a sequel for years, and every little easter egg Rockstar puts in its games adds more fuel to the fire.

The GTA Online casino update, for example, added new decoration options for your penthouse. The Bully 2 subreddit (via Comic Book) picked up on one option in particular: called Canis Canem Edit. That’s Latin for ‘dog eat dog,’ and it happens to be the motto of Bully’s Bullworth Academy – as well as the game’s title for its original European release.

The phrase similarly appeared in Red Dead Redemption 2, engraved on the barrel of a revolver you get at the conclusion of a particular side quest. For desperate Bully fans, the fact that both these references have happened within a, uh, year of each other is totally confirmation that Bully 2 is coming.

This is probably not confirmation that Bully 2 is coming.

Rockstar may indeed be working on a Bully sequel – the best hint we’ve had is a casting call, though that’s since been denied – but an inside reference through an easter egg probably isn’t the best thing to pin your hopes on.