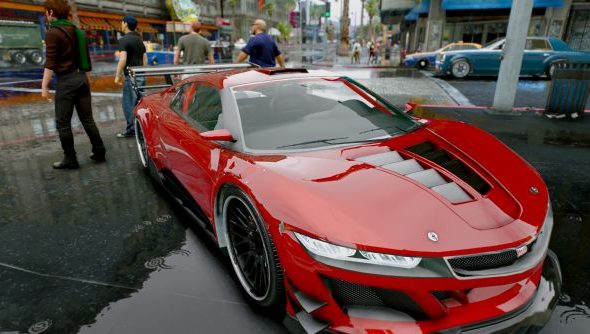 I have never been fooled by a graphics mod before, but The Pinnacle of V got me. The image above is not a photograph of someone’s car in LA, but a screenshot of the mod running. In its original 4K resolution you can just about see some jaggy edges and too-smooth textures, but at any human resolution it looks like a real-life still. It’s something you can apply to your own GTA V installation right now.

It’s also only half of what The Pinnacle of V actually does.

We’ve got lots more GTA 5 mods for you, once you’ve repaired those eyeballs.

The feature list for the mod is humongous and ridiculous even before you get beyond the graphics settings. 4K textures and photo-realistic water aside, it’s a realism mod of the highest calibre. It effects everything from the ways cars handle, to making bullets travel at real speeds rather than instant-hits, to the ways gangs interact with the police. It even alters population density by time of day and location – it’s an overhaul of every system in the game that could be made more like real life.

Best of all, if either half of the mod isn’t interesting to you, there’s seperate downloads for the textures only, other visual updates or just the game alterations bits. Solo creator Josh Romito seemingly thought of everything. He’s been updating the mod regularly since the PC release of GTA V and it’s now very much complete on version 1.8.1 but still in development. Here’s his latest video showing it off, which has some YouTube-related framerate issues that shouldn’t be present in-game if you’ve got a PC that can handle it.

Downloads are available on the official site, check the requirements first. There’s an FAQ if you’re having issues. Let us know below if reality is actually a highly-evolved computer simulation, because honestly I’m not sure any more. Can you run it? Take the GTA 5  system requirements test at PCGameBenchmark.