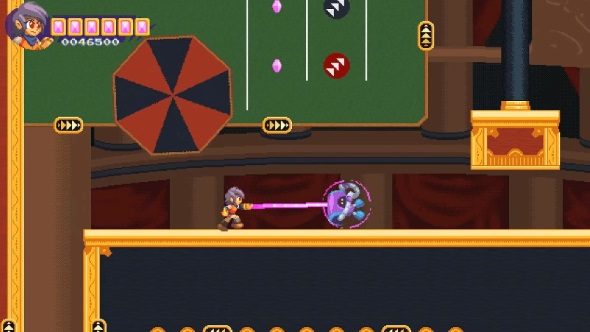 I have a great many soft spots for nostalgic games of every possible stripe, but there’s an especially big place in my heart for anything that reminds me of Treasure’s bizarre N64 platformer Mischief Makers.

Grapple Force Rena does just that, with its mixture of non-standard movement, and grappling-heavy combat involving flinging hapless, blank-faced robot enemies at each other until they explode. And the best thing? The announcement trailer came along side a generous 5 level demo, playable direct on the official site.

Grapple Force Rena is perhaps a little small to include on our list of the games to keep an eye on for 2018, but I’ll definitely be keeping up with this one, too.

Grapple Force Rena is largely a one-man project, led by debuting developer Tim Ashley Jenkins. The soundtrack is from Jarad Moloney, and Jason Lord contributed the beeps, bloops and warbles that make up the sound effects. It’s about as indie as they come, and GalaxyTrail – the similarly small studio behind surprise multiplatform Sonic-like success Freedom Planet – are helping with publishing duties; paying it forward after getting their own lucky break on a similar project, with similar inspirations.

While Freedom Planet made some pretty overt nods towards Treasure’s earlier games such as Alien Soldier and Gunstar Heroes, Grapple Force Rena is very much in the vein of Mischief makers, complete with an irreverent sense of humor, characters that aren’t quite fully invested in the story, and a world that seems built to support strange gameplay mechanics rather than the other way round. It’s easy to see why GalaxyTrail wanted to get involved.

The game was quietly Kickstarted a while back, but only raised a few thousand dollars. Enough to give a solo developer a foot up and perhaps a better development PC, but not exactly a pot of gold. Still, it’s nice to see something so slick come out of such a low budget, even if some corners are being cut, such as background art detail.

A Steam page for the game will be up fairly soon, but until then, enjoy the demo. The full game is due out sometime this year, but nothing is set in stone at present.