Gratuitous Space Battles 2, Positech’s laser-filled strategy sequel, is a training simulator for prospective fleet commanders. You never know when you’ll be whisked away to an alien world or the future and told to put together a fleet that can conquer the galaxy.

Like its predecessor, players are put to work making ships, from midge-sized fighters to dreadnought behemoths, which can then be unleashed on enemy fleets in large, hands-off space battles. It doesn’t deviate much from the original, but is blessed with flashier sci-fi scraps, lavish space backdrops and some new, handy toys waiting to be affixed to extremely customisable ships.

Space is a setting rife with wars. Even progressive, slightly preachy Star Trek with its idealistic Federation utopia thrives on conflict. Gratuitous Space Battles 2 just gets rid of all the diplomacy, interstellar trading and space station soap operas, cutting straight to the metal-melting lasers and floating death machines. 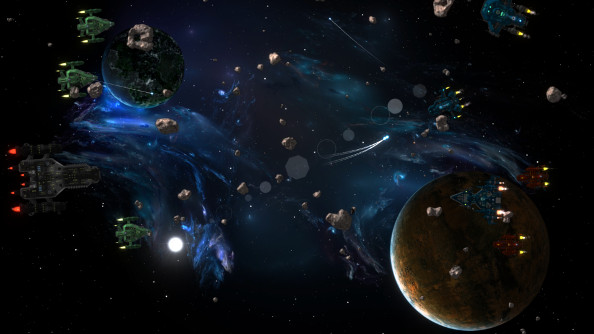 “How do I beat this fleet” is the core question that drives GSB2. And to do that, you need to build a better one. While screenshots and videos have focused on the titanic space battles, it’s really the setting up of those battles that takes up most of the game. That’s where you’ve got control. Once the fight begins, you’re left to watch your fleet sink or swim.

The game’s beta build comes with some basic sample ships that can be deployed straight away, and they are enough to snatch victory in the first couple of missions, but after that, new ships are really needed. The long list of hulls, laser cannons, shields, armour and special modules like tractor beams and AA guns is, at first, promising, and then a bit deflating.

My first reaction to the list was to imagine all the ships that I was about to build with from all of these diverse components. But when it came to picking which ones to slap onto my first ship, my vision started to blur as a big swirling mass of numbers filled my skull. I was trying to build a cruiser, which – at the start – offers a choice of around 15 weapons, which increases when you start to research new ones. Each of these weapons is laden with around 16 different stats, some a little less, some a little more. And, at the moment, there’s no way to compare them efficiently. It’s not possible to bring up the stats of two different weapons together, or any component. 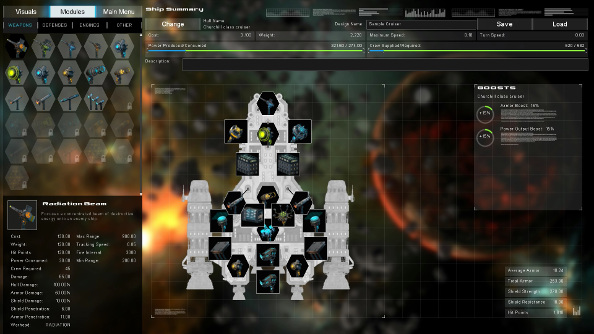 Bleary-eyed, I poured over the list, looking for the right pieces to slot into my spaceship jigsaw. There are so many stats to compare, and so many minute differences. But when a battle can be lost or won thanks to the fate of a single ship, tiny differences can’t be overlooked. The numbers are meaningful, it’s just that they are extremely overwhelming. Thankfully, they aren’t absent context. Hovering over any stat, from a module’s damage output to the overall shield strength of the ship, brings up a concise but helpful tooltip.

Each ship class has an inherent strength and weakness, so while a jack-of-all trades type vessel might be handy when it comes to supporting other ships, it’s not going to be as effective as ships build for a bespoke fleet designed to tackle a specific enemy configuration. Essentially, each job needs the right tools so you can grind everything down into space dust. You might want support ships that can defend against missiles while shooting beams of energy that heal the shields of allied ships, or long-range snipers that stay out of the front lines so they can whittle away the armour of enemies from afar.

Knowing what’s needed for a battle can sometimes be gleaned from the set-up phase, where you can see the positions and size of the enemy fleet, as well as make some educated guesses about how the battle will play out. That’s where orders can be assigned, too. Ships can be told what types of vessels they should attack, and formations can be set so that groups will stick together and back each other up.

That all requires a bit of guesswork, though. GSB2 is all about experimentation. You build a fleet that you think is amazing, watch it get utterly annihilated, and then you use what you learned to build one that’s actually amazing. The busier, more elaborate battlegrounds make this a bit more challenging than it was in the first game. 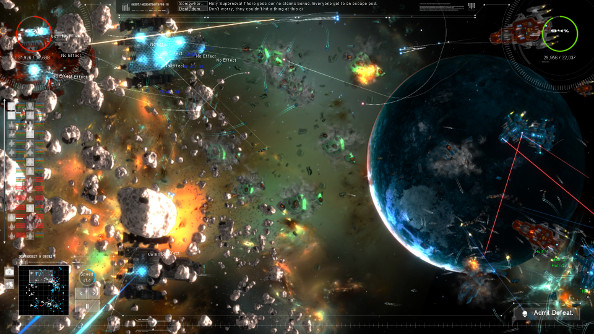 While GSB is a 2D game, the stages are layered. Behind the plane the ships float on are planets and gas clouds, while asteroids and debris peppers the foreground. The scenes are significantly more spectacular than those of its predecessor, especially when the ships blink into existence and start bombarding each other with lasers and missiles, lighting up the darkness with neon death. But this all makes it bastard hard to see what’s going on.

All this pretty window dressing makes the game a pleasure to watch, but there’s no death of visual and statistical information to soak up, and all that eye-candy obscures it. Things are hard enough when you’re trying to keep track of the tiny fighters, for instance, even without massive hunks of space rock completely obscuring them. Battles can at least be paused, so you have time to zoom in and explore the UI in an attempt to make head or tails of the conflict.

To help me at least identify my ships more easily, I tried to make them stand out from the crowd of other human and alien vessels. This is the second part of the cosmetic upgrade contained within GSB2. Cosmetic customisation is a lot like the Galactic Civilization ship builder, where you can slap on wings, antennas, weird spinny things, discs, cockpits and countless other parts that serve no other purpose beyond making your flying fortress look gorgeous or grotesque.

Here’s something terrible I made earlier: 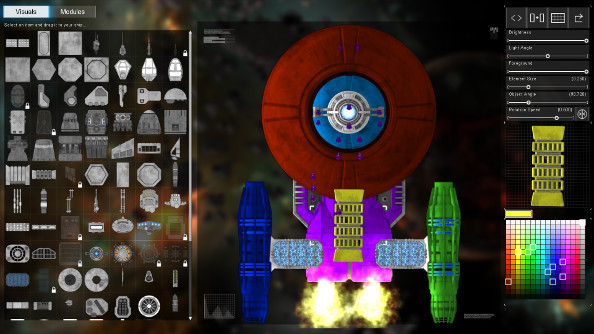 The ship’s hull can’t be changed beyond the colour scheme, but everything you attach to it can be altered, from its size to how fast it rotates. For something that has no impact on the outcome of a battle, I must confess that I spent at least half of my time in the beta build just making silly looking thingymabobs — they really can’t be called ships. Watching them in action, my little (big) babies, flying the nest with their plasma cannons and nuclear warheads, is always emotional.

You’ll be able to make your own hunks of junk or sleek space cruisers when Gratuitous Space Battles 2 starts orbiting Earth in April.