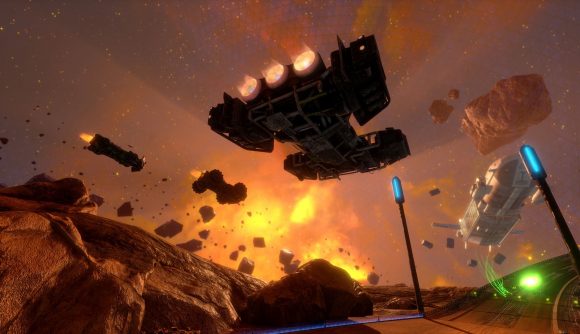 Following in the wake of Rollcage, another giant of arcade racing has its spiritual successor, and funnily enough, it's come to the same game. With a surprise update that is already live, Grip has added antigrav racers, bringing the spirit of Wipeout to modern PC gaming.

Today's update adds 15 new antigrav vehicles called 'airblades', as opposed to the wheeled 'rollers' that launched with the game. We also get two new race tracks set in outer space (look out for Atlas Station and Impact after the update downloads), two new tracks, five new car skins made by the community, and a range of quality-of-life tweaks to improve race flow, collisions, and AI. There's even HDR display support now.

“I’m pretty sure if Wipeout and Rollcage hooked up, this is the baby they’d pop out,” says Leo Zullo, managing director of publisher Wired Productions. “It’s beyond exciting to finally be able to reveal Airblades, as we see it as a true game changer and industry first.”

In its track design and emphasis on speed, Grip has had a lot in common with Wipeout since its inception – maybe even since it was Rollcage, back in the ’90s – so this update makes a lot of sense. You can take a look at some airblades in action in the trailer below:

It’ll be interesting to see how airblades compare with rollers, given that Grip’s basic cars have been able to drive on ceilings and spend a lot of time in the air anyway. I would guess there will be some handling quirks to get used to – an antigrav car doesn’t, ahem, grip – and some stat differences, perhaps like the difference between bikes and cars in Mario Kart.

Petrolhead? Check out the best racing games on PC

But even if antigrav racers don’t turn out to be a total game changer for Grip, it’s still brilliant in its own right and if you miss the arcade racers of the ’90s and early ’00s, it’s absolutely worth a try. After years in early access it got its full launch late last year, since when it has had a number of major updates, adding team deathmatch just last month.