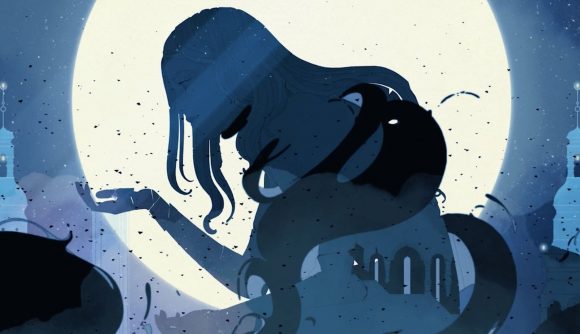 Devolver Digitial recently published Gris, a beautiful and melancholic platformer in which a young woman, robbed of her voice, must travel through a dreamlike, ruined landscape in order to retrieve it. It’s a game more about sober reflection than immediate stimulation, which makes it all the more surprising that Facebook has rejected an advert for the game for being “sexually suggestive.”

The publisher’s official Twitter account posted yesterday saying that “Facebook rejected a GRIS launch trailer ad for this ‘sexually suggestive’ scene so this year is going great so far.” The image in question, which you can see in the tweet below, shows a statue of a woman silhouetted against a full moon.

It’s frankly laughable that there’s anything “suggestive,” about the image. The woman’s shoulders might be visible, were they not shrouded in darkness and hair, as is her forearm, but there’s no obvious nudity, and the rest of her body is quite clearly made of stone. It’s an image that’s relatively central to the game, part of a motif that recurs on a regular basis.

Talking to Polygon, Devolver representative Stephanie Tinsley said that the social media platform’s decision “is really stupid.” Tinsley says that Devolver appealed the decision, but was rejected because Facebook does not allow nudity (again, there is clearly no nudity on display).

Facebook rejected a GRIS launch trailer ad for this ‘sexually suggestive’ scene so this year is going great so far. pic.twitter.com/frVaYOXIHe

To make matters worse, Facebook’s community standards state that “photographs of paintings, sculptures, and other art that depicts nude figures” are allowed on the site. So a photo of a drawing of a naked statue would be just fine, but the drawing itself is a no-go.

Read more: Celeste was our 2018 Game of the Year

While Facebook seems to think that Gris is nothing but smut, we quite like it. Ian described it as achingly beautiful, while Rachel compares it to our 2018 Game of the Year, Celeste, thanks to the way it uses its platforming mechanics as a metaphor for grief.