John Sonedecker’s world is where the tactical shooter meets the military. As one of the first 20 developers at Red Storm in the ‘90s, he helped birth Rainbow Six, Rogue Spear, and Ghost Recon.

“I was young and didn’t know better,” he tells us, “but it was a lot of fun and [I have] a lot of good memories. We definitely helped start a whole new genre.”

A couple of years later, Sonedecker was working at Fort Bragg, the 251-square-mile military installation in North Carolina. There he turned gaming technology into training applications for the Department of Defence and US Special Operations Command.

We consider Rainbow Six Siege to be among the best FPS games on PC.

“The simulations industry is a lot different than the game industry,” he says. “It’s satisfying in a different way. You get to help people, and provide them things that hopefully save their lives one day. But it’s not as creatively stimulating as the game industry can be. I missed it.”

Hence Ground Branch: a tactical shooter informed by both Sonedecker’s experience at ground zero of the genre and his time in the world of real military tactics.

Ground Branch is designed for deliberate and calculated play, with multiplayer games more methodical than they are hectic.

The mechanics of nostalgia 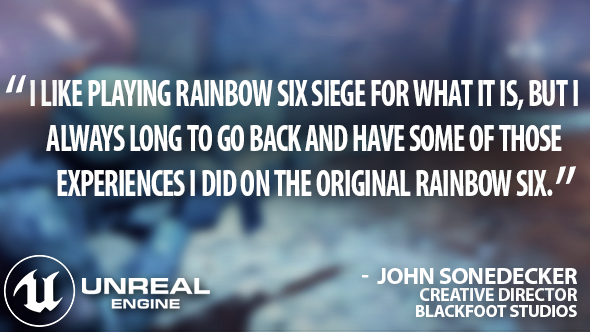 “I like playing Rainbow Six Siege for what it is, but I always long to go back and have some of those experiences I did on the original Rainbow Six, Rogue Spear, and Ghost Recon,” Sonedecker says. “There was a certain feeling I had when playing those games that I don’t get when playing a lot of games now. I can’t find that experience, but I have the understanding and ability to go make it.”

Recapturing that feeling is all about the small details: the speed with which you can manoeuvre your weapon, or the fact that there’s no quick scoping.

“It’s not twitch, it’s not super-reactionary,” Sonedecker explains. “I have to make a concerted effort to decide what I want to do next.”

A tweak as simple as slowing movement speed can make the difference. It’s that pace that gives you time to formulate a plan: to decide whether you should engage an enemy now, or creep a little closer; to ponder whether taking the high ground would leave you more exposed.

“If you as a player are moving through a space, using your weapon, and don’t have that nostalgic feel that you’re more in control? We don’t have it,” Sonedecker says. 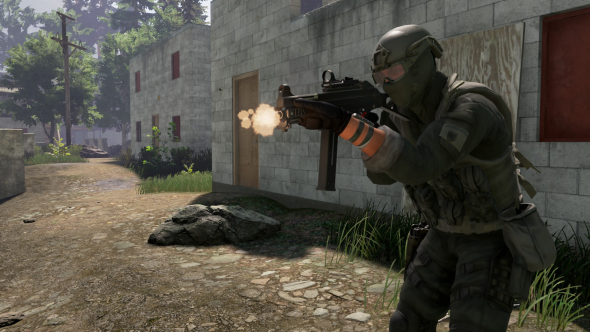 Sonedecker describes himself as an “old industry soul”, but isn’t averse to taking advantage of some of the modern innovations in Unreal Engine 4. The Ground Branch team have used Blueprint, the engine’s node-based scripting system, for quick prototyping.

“For someone like me, who is an artist and technical person [but not a coder], it’s great,” Sonedecker says. “We’re a very small team so just getting things done is tough sometimes. I’ll come up with some idea and get a really rough version of it in-game, and [the coders] will go in and actually make it work.” 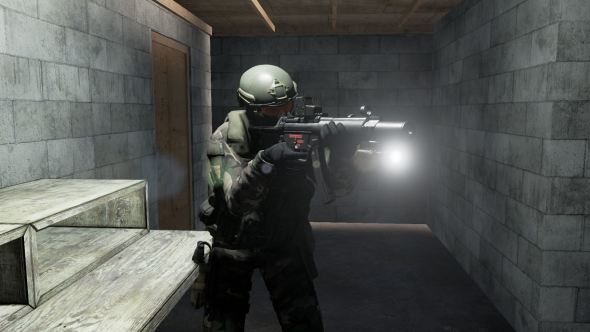 Ground Branch’s biggest challenge has been multiplayer networking – the communication between server and clients that ensures the experience delivered is as seamless and accurate as possible.

“Getting everything working over the network and replicated properly has been a challenge for us, because we do so much customisation with your character and your weapon,” Sonedecker says. “We do things differently than other people do.”

This difference stems from Ground Branch’s simulationist edge. The team has implemented weapon collision, for instance, which means taking a long weapon into a tight area can cause problems. And some of the common compromises made in the FPS genre are not found here.

In many shooters, it turns out, a round emerges from the shooter’s forehead rather than the muzzle of their weapon – but not in Ground Branch.

“A guy would lean around a corner, and you would see his head and not his weapon or his hands, but you get shot,” Sonedecker says. “There are a lot of things like that – we’re trying to make it so that if you see something, that is what you can hit.”

It’s these simulation-style elements that make Ground Branch such a different prospect from its contemporary peers – even the ones that share a name with the games Sonedecker helped first bring to the PC. And they’re what’s making the game resonate with its testers.

“I’m proud of how far we’ve got with no budget, doing it on our own,” Sonedecker says. “When we put out a build, the first thing people say is, ‘Oh my god, it brings back memories of 15 years ago’.”

In this sponsored series, we’re looking at how game developers are taking advantage of Unreal Engine 4 to create a new generation of PC games. With thanks to Epic Games and BlackFoot Studios.