We’ve got ourselves a small-off, people! Get ready for the ultimate in mini graphics cards head-to-heads as Gigabyte have taken the wraps off their new GTX 1080 Mini. It’s an overclocked GTX 1080 with a footprint that makes Zotac’s wee effort look positively obese, and AMD’s RX Vega Nano seem like mere pocket calculator stuff.

The Zotac GTX 1080 Mini was the smallest version of Nvidia’s Pascal-based powerhouse that I’d seen in the wild, measuring in at just 211mm in length, but Gigabyte’s own GTX 1080 Mini somehow squeezes high-end GPU cooling into a package that stretches to only 169mm.

Despite having a single 90mm fan attached to the Gigabyte heatsink, the GTX 1080 Mini still has a factory-overclocked setup. The default ‘Gaming Mode’ gives the GP104 chip its standard 1,607MHz/1,733MHz clockspeed configuration, but the ‘OC Mode’ pushes things on a touch further to 1,632MHz/1,771MHz, for its base and boost clocks respectively. 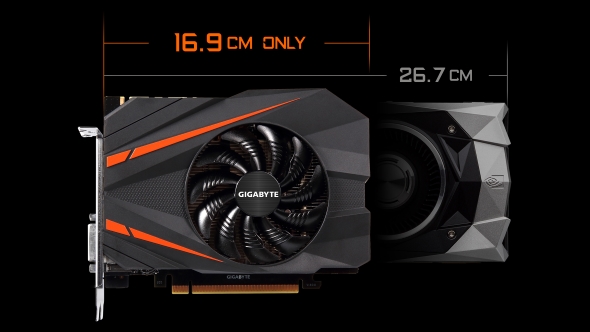 Interestingly this version is only using the original GTX 1080’s 10Gbps memory speeds as opposed to the 11Gbps GDDR5X chips that were introduced alongside the speedy VRAM that came with the GTX 1080 Ti when that launched in March. I guess the wee cooler’s not hardcore enough to be able to deal with both an overclocked GPU and the extra heat generated by overclocked memory.

It might seem a little odd for Gigabyte to be releasing a new version of the GTX 1080 when we’re talking about a GPU that’s over a year old now but, given that we’re not going to see anything Nvidia Volta shaped until 2018 and AMD’s RX Vega is struggling to best it, there’s still a lot of life left in the ol’ Pascal dog. 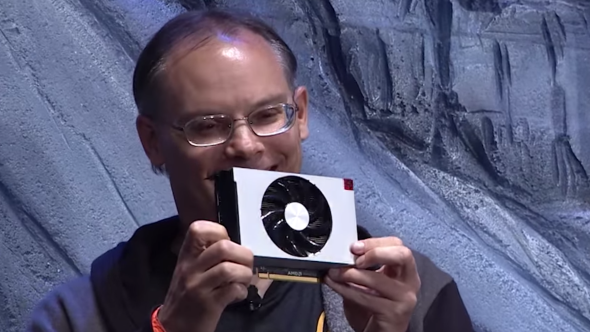 Creating a super-small version is a smart move, too, given that AMD have been teasing their own micro machine variant of their Vega cards, the Radeon RX Vega Nano. So far, AMD have yet to release the Nano – except, of course, to Tim Sweeney – but when it comes to small-form-factor gaming beasts Gigabyte’s more powerful GPU ought to give the red team’s card some serious problems when it comes to gaming.

Gigabyte haven’t revealed a release date, or price, for their GTX 1080 Mini, but I wouldn’t be the least bit surprised to find it launching at the same time as the AMD RX Vega Nano.