At a live-streamed event today, ArenaNet pulled out the big guns as far as Guild Wars 2 announcements go. Not only will the upcoming expansion, Heart of Thorns, be introducing large-group PvE raids to the game for the first time, but base Guild Wars 2 will now be completely free to play. If you want in on the expansion’s various globs of content, you’ll need to pay full price, but there’s no barrier before that. That scheme went live the second the conference went off-air just moments ago.

This is a pretty humongous change to the way the game operates. I asked ArenaNet president and co-founder Mike O’Brien what the catch was and if they planned to introduce heavier microtransactions or limits to the free version.

“We’re not changing the business model. We’re not trying to heavily monetize free players. The game experience is the same as it always was, and the gem store is the same. Our revenue model really is to get you into the game and if you love it, we hope you buy Heart of Thorns,” he said in an e-mail, “Really I think this is a unique and fantastic opportunity. Some people apply the words ‘free-to-play’ and they can be kind of dirty words. They mean a game where it’s not really always free, where you get in the game and very quickly there’s the hand out, asking for money. But Guild Wars 2 isn’t like that. It was designed to be a $60 boxed retail product, and that is largely the game that’s now available for free.”

He’s not wrong about my first thought when hearing the news, nor that this is a unique situation. Legions of MMOs have switched payment models in the past decade, as F2P has proved itself and subscription models have died out for all but the biggest. But Guild Wars 2 was fairly different for being a single purchase, regularly updated MMO in the first place, nevermind this now-switch to actually-free to play.

The idea of that upgrade was a problem for many current players when the pricing structure of the expansion – essentially that it is the same as a full-price new game – was announced earlier this year. Their complaints came down to not being able to pick up the expansion seperately from the base game, with this F2P announcement not having yet reached the wild. I asked Mike how he thinks that controversy came about.

“We were not good at communicating when we started bundling the base game with Heart of Thorns. Of course we did that with the best of intentions. We see buy-to-play as being simple and clean. You buy the game and you can play as long as you want to, with no monthly fees. And so we wanted it to do that with new players for Heart of Thorns. As a new player, you don’t have to buy the base game and then buy expansion packs to catch up with your friends. Instead of having prerequisites like that, we made it simple: just buy Heart of Thorns. It’s clean but we didn’t communicate it well when we introduced it, especially for veteran players.”

ArenaNet tried their best to fix the situation once complaints arose, however. “We went back and worked with our fans,” Mike continues, “we made sure they understood what our intentions were, and we made sure that veteran players were taken care of. We did whatever it took to take care of people. People who asked for refunds got refunds. People who wanted to transfer their recent purchases towards Heart of Thorns were able to transfer.”

Once those folks get into Heart of Thorns, it’s all about the new end-game content. The focus of that is raids, new 10 player dungeon-like experiences that require good co-ordination between participants to succeed. It’s been a long time coming to Guild Wars 2, which has gone three years without introducing them. Game Director Colin Johanson explained to us why raids and why now:

“Leading up to this expansion, one of the things players have been asking us for is more things for their level 80 characters to do and for challenging content. They wanted something that required them to band together with their friends that was really challenging to overcome and defeat. We felt like raids was the perfect answer for that. It’s something that’s in the MMO space and it’s known and has areas for improvement. We felt we could take those things and do them even better. For example, having barriers to entry and other issues with raids is something we wanted to tackle and solve in a uniquely Guild Wars 2 way. So we think we’re providing the ultimate Guild Wars 2 raiding experience and that’s why we’re doing it.” 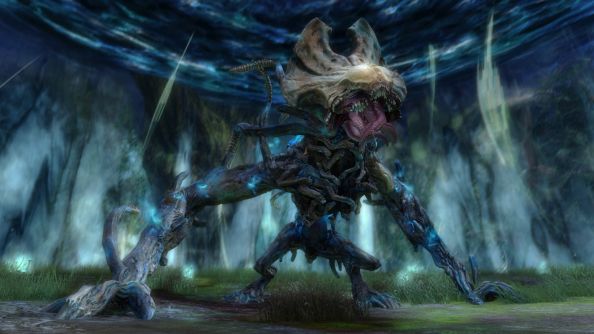 The first raid won’t be shipping with the expansion, instead being released as three wings in a series of patches shortly afterwards. This is similar to the model WoW has used for recent expansions, and seems to work out quite well. It stops there being a race to prepare and lets even the less hardcore players get ready to jump in once the raid is released. Plus, development efforts can be focused on the content players will experience first without sacrificing the quality of the raid itself.

However, unlike WoW, Guild Wars 2 raids will be of a fixed size. They’ll be designed and tuned around 10 players and no more, rather than the scaling technology used elsewhere in the game. There won’t be different difficulties or the option for larger guilds to bring their whole team in. Colin says they wanted to focus their efforts on ten players, believing it to the perfect number:

“One reason is that any larger than that and the challenge becomes how you get and organise people rather than how you work together to overcome the challenge. It kind of turns into herding cats, if you will. We really want it to be the challenge of how you overcome the encounter and not how organised you can get a group of people. We thought ten was a good number. It’s approachable: on a given night you can get ten people on who want to do a raid together and play new content.” 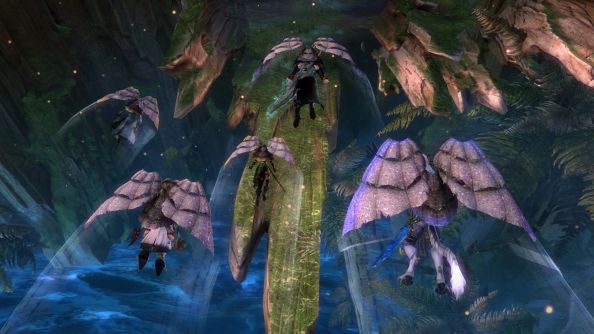 As for scaling, ArenaNet believes they use that technology very well elsewhere in the game. Raids, as Colin puts it, “are really filling a component which Guild Wars 2 doesn’t have yet, which is ten-player, really challenging content that you know is something that helps you and nine other players refine your skills and strategy.” They’re the ultimate group end-game.

That’s the theme of Heart of Thorns – end-game. No matter what you’re interested in, ArenaNet are looking to provide for you. Colin said that the most common demand by their playerbase was for more stuff to do at max-level. Raids are just one part of that:

“For our PvP players, we’re adding competitive PvP leagues, which is a huge requested feature that should drive a ton of competitive gameplay and help bring PvP for Guild Wars 2 into the next era of where we want to take it,” Guilds will be getting some love too, “We’re adding guild halls, which is a massive social progression feature for you and your friends to band together to capture a guild hall and build that hall as your guild levels up and progresses, an end-game for communities to work together that we will regularly expand on.”

Even those who prefer to go it alone can look forward to new challenges, with a mastery system taking the place of what would be a new level cap in other games. You’ll be adventuring through a whole new jungle region to unlock new abilities and sub-professions like the Herald. These sub-professions are essentially new classes, but built off your old one. You’ll use them to battle new world bosses in the expanded storyline, beating them up solo or gathering an ad-hoc group of players from those who are in the same zone. 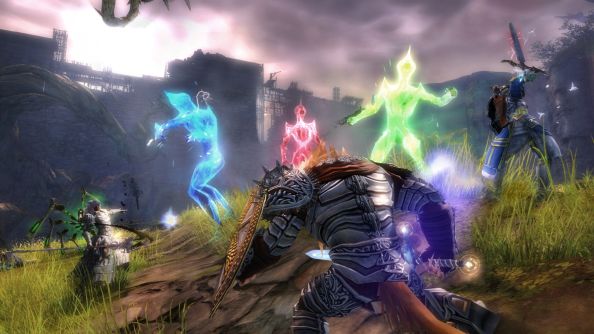 What Mike and Colin both made clear was that Heart of Thorns is the beginning of another massive update cycle. As Mike said, over forty major patches were introduced to Guild Wars 2 free of charge and they don’t plan on changing that philosophy. New raids will be added while new open world content will expand upon their living story. They didn’t mention anything specific, but the promise is that GW2 will continue to grow at the same rate as before.

Obviously, they’re looking to attract new players with all this fresh stuff. But is there a group who have always been interested in trying Guild Wars 2, but were never willing to cash in and thus will now show up for the free version of the base game? Is there a reason they should try it now? Mike thinks so:

“Right now is a great time for new players to try Guild Wars 2. We’re going to launch the expansion later this year, so we already have a lot of new players coming into the game. With all of this new end-game content the expansion has to offer, we thought this was the perfect moment. It gives them time to create their characters and get them ready for the launch of Heart of Thorns.”

You can play Guild Wars 2 for free right now. Heart of Thorns releases on October 23rd, with pre-orders live now.