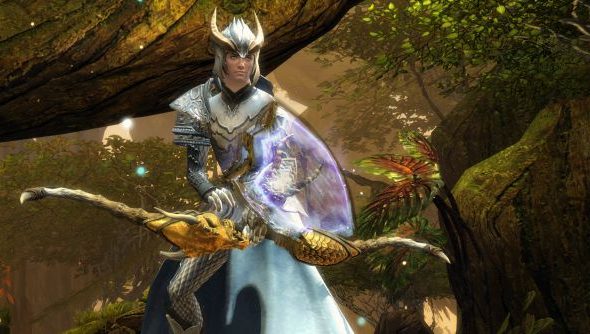 Continuing their reveal of some of the profession specializations coming with Guild Wars 2’s first expansion, Heart of Thorns, ArenaNet have unveiled what’s in store for the Guardian profession. Dragonhunters as they’re called, will don a bow and use virtuous empowered abilities to not only damage foes, but keep them under control too.

We’ve got a video of the Dragonhunter doing their thing below, so check it out.

Dragonhunters will get access to longbows, allowing them to shoot “massive, single projectiles” at a “ferocious velocity”. Not only will they be adept at smiting foes, but they can use this newfound weapon to aid allies too. Symbol of Energy can be launched into an area from ranged, allowing you to grant them vigor from across the battlefield. You can also use Deflecting Shot to actually knock enemy projectiles out of the air, if you’re timing is right.

Virtues have also received a change. Instead of only just granting allies buffs and enemies debuffs on use, they’ll have physical manifestations upon their activations. An example of this is Wings of Resolve. As seen in the video, they can leap large distances offensively, or jump to their friends to heal them.

Lastly, Guardians will now gain access to light-based magical traps, which will trigger once an enemy has run over them. Their new elite skill is actually one of them, called Dragon’s Maw.

You can read more on the Dragonhunter on the Guild Wars 2 website, and watch anArenaNet stream of it at 8pm BST tomorrow.