Imagine this: you’re scrambling up a cliff-face to reach a waypoint, oblivious to the convenient staircase around the corner that’ll get you to the summit safely. You’ve just come from clearing a gruelling dungeon on Shing Jea Island in pursuit of high-level loot, before hopping across to a new, mountainous section of the archipelago. When you finally reach the top of the cliff you’re greeted by dozens of cats, and you can pet them all.

This is Cat Island, which serves as a brief reprieve from the fiery chaos that makes up the storyline of Guild Wars 2’s latest expansion, End of Dragons – which, as it happens, you can buy here. As you pet Pickles, the most beautiful boy you have ever seen, you have a moment to rest and take in the tranquil beauty of a quiet corner of Cantha, the new region introduced in End of Dragons. This is a huge new area to explore, and it’s one that varies brilliantly between daring dungeon adventures and feline retreats. The expansion delivers a perfect blend of the excellent world-building, curiosity, and immersive fantasy storytelling that characterises the Guild Wars series.

The campaign wastes no time launching you into its story. In a heartbeat, you’re thrust into a high-octane action sequence as you leap between Aetherblade pirate airships to rescue one of your companions. You’re miles up in the air with only your dragon ally Aurene for support. In the mayhem of the pursuit the Aetherblades crash-land, and you find yourself on Cantha, a continent that’s been lost for 250 years. Cantha and its people now find themselves violently thrust back into the broader world of Tyria, while also dealing with the emerging threat of the marooned Aetherblades, whose leader is hellbent on harnessing the magic of Cantha to deadly ends.

From a mission design perspective, ArenaNet has learned from past mistakes. Heart of Thorn’s story was impenetrable to solo players – it felt impossible to advance through without a decent group backing you up. Path of Fire had a shorter story, but increased the difficulty level even higher, which is even more problematic for those with more casual inclinations. 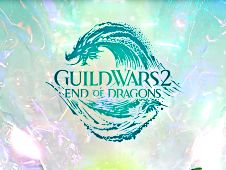 The story of End of Dragons, by contrast, is welcoming to solo players. It feels like a return to the base game – there’s ample challenge, but a solo player is still able to overcome the various encounters without too much friction. Even with a poorly optimised build I had little trouble grinding through the campaign, which should take a few dozen hours – and that’s without counting all the times you’ll get distracted by Cantha’s many wonders. 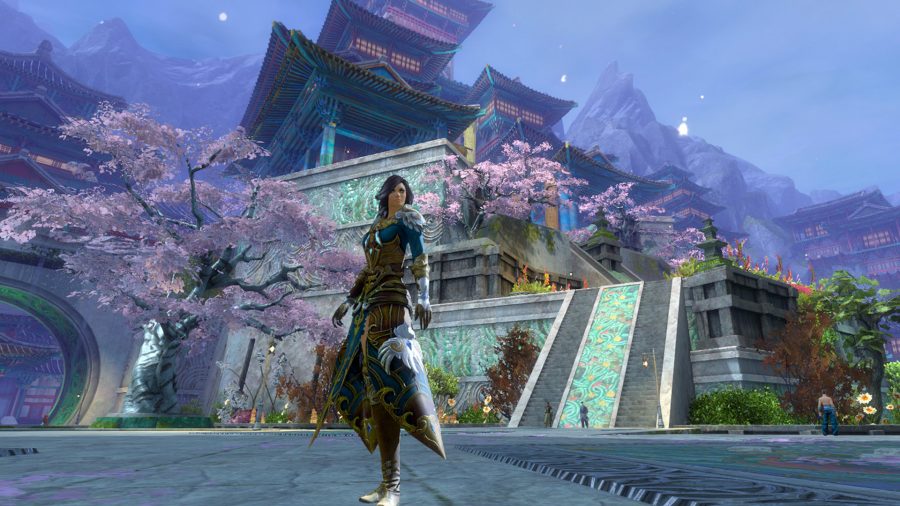 I spent numerous hours climbing every tall building and mountain I could find to survey the beautiful island region. Shing Jea, for example, juts out of the tranquil seas with severe cliffs and temples that graze the clouds. It’s the clear cultural hub of Cantha – home to artists, scholars, and the continent’s key historical sites. New Kaineng City, by contrast, is a bustling, neon-lit urban metropolis. Holographic projections paint the walls with news and art while street vendors peddle their wares on congested thoroughfares, while higher up in the city’s wealthier districts you’ll find aloof aristocrats enjoying stunning views of the city. There’s also a precocious phoenix you can fight if you so dare.

End of Dragons features some of the strongest world-building in MMORPGs. Guild Wars 2 has always been packed with entertaining ambient dialogue, but some of the exchanges in End of Dragons are really worth stopping for. Much of it muses on culture, industry, and technology. There are biting critiques of the bureaucracy that often comes with technological innovation, with many NPCs complaining about having to get fishing permits or transit papers. One of my favourite moments was overhearing two authors bickering about writing in the Shing Jea Monastery, with one pretentiously gushing about writing “LIT-THE-RAH-TURE, not drivel for the masses.”

In terms of gameplay, End of Dragons provides a new array of skills to master. Each class has a new elite specialisation it can pursue that offers a distinct playstyle. As a ranger main, I’m elated to see the monotony of the ranger being a ranged one-trick pony finally being shattered by the new Untamed specialisation. This set of skills allows rangers to wield a terrifying hammer and hurl themselves into masses of enemies and crush them with the unbridled fury of nature. It’s rare that MMOs ever give ranged classes the opportunity to get their hands dirty, and it’s a welcome change of pace here. 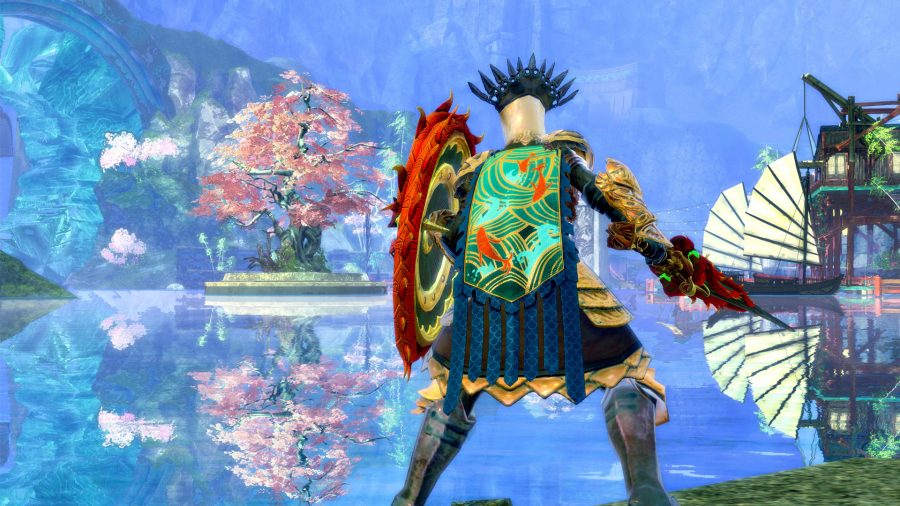 The new abilities continue the design ethos of Guild Wars 2: breaking the holy trinity of tanks, DPS, and support archetypes in MMOs. Technically, all classes can fill one of those three roles, but the balance has always been a little wonky and the established meta firmly reflects that. The new elite specialisations feel like a concerted effort to disrupt that meta. For instance, the Untamed specialisation creates a viable melee build that employs a series of cantrips to reduce damage taken or leech life from enemies. The Willbender elite specialisation for the Guardian turns them from a lumbering armoured tank with healing capacity, into lightning-fast whirlwinds of pain.

These new specialisations create new ways to play with tried-and-tested classes. It also changes the nature of the global battlefield. Fighting alongside the new class skills is a beautiful experience as virtuoso mesmers rain phantom daggers upon foes, and mechanist engineers construct mechs to fight alongside you. There’s just a lot more going on in battle, and brawls are always a feast for the eyes.

As the story progresses, you get a jade bot that allows you to move around the world much more quickly by using compatible teleporters and ziplines. This comes in handy in New Kaineng City as, much like any metropolis, it has a frankly baffling layout. I lost count of the number of times I got lost and accidentally wandered down an alleyway to find myself in the middle of criminal dealings. Zipping out of danger with my Jade bot kept me from having to fight for my life against one of the local gangs in New Kaineng. 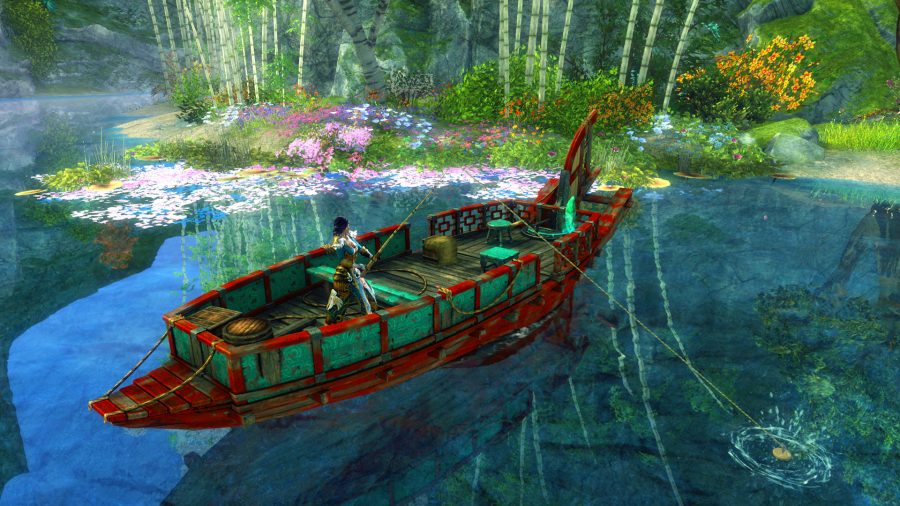 The introduction of fishing is sure to delight many. The fishing minigame is intuitive and there are countless achievements for intrepid anglers to pursue. Nothing beats kicking back on your skiff and casting a few lines. The skiff also offers another way to traverse Cantha’s many bodies of water. It’s especially helpful for anyone who’s not played Path of Fire and unlocked the skimmer mount, and adds a unique multiplayer component as you can transport multiple people.

There's just a lot more going on in battle, and brawls are always a feast for the eyes

This is where Guild Wars 2 always shines – its balance between solo play and engaging multiplayer scenarios is second to none. This is seen most prominently during meta events, which link smaller events together before culminating in a massive boss fight. These events are always challenging, and End of Dragons offers some of the toughest fights yet. The elite enemies you fight in the Shing Jea meta, for example, will slay you repeatedly, and things only get more challenging when you reach the final boss, who litters the battlefield with powerful AOE attacks.

The best part of these events is that there’s usually something at stake if you fail. For instance, during one event you’re fighting to prevent a total blackout of the city. If you don’t return power to some of the wards, their transport links will be cut off, which forces locals to rally together to protect their wards. 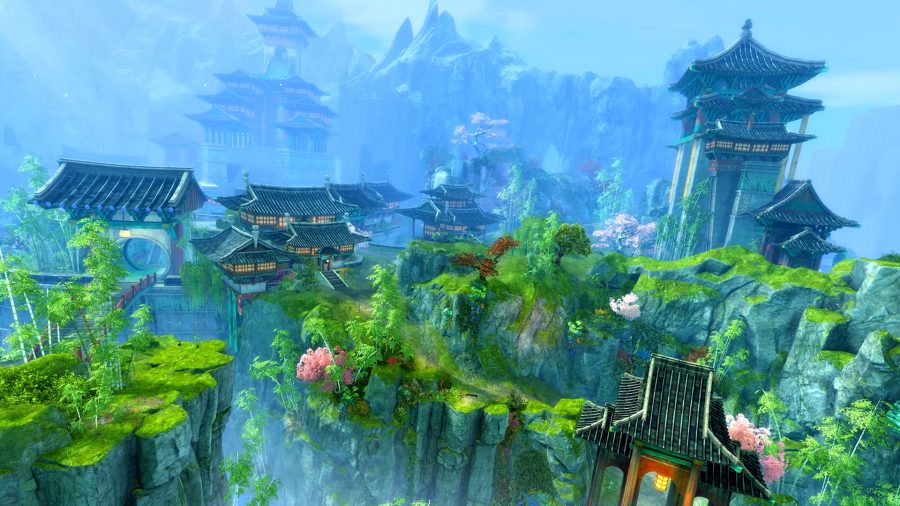 However, there are lingering problems with End of Dragons. Some of the mission mechanics are frustrating. The platforming sequence that opens the expansion relies on an unresponsive targeting reticule, and more often than not, I end up clipping through platforms before plunging to my death. And then there’s a bizarre repair minigame which tasks you with recognising and matching patterns that flash on the screen. It’s terribly dated and, like a few features in End of Dragon, feels like an unnecessary bolt-on.

Nonetheless, End of Dragons is Guild Wars 2 at its finest. The new environment offers unique opportunities for exploration in a long-lost part of Tyria’s history. Veterans have a host of new enemies to fight, and new players have plenty of opportunities to engage with the content without facing an insurmountable difficulty or leveling curve. It is a perfection of the formula that has made Guild Wars 2 one of the most popular MMORPGs. I’m more than ready to give my life to fashion wars again and strive to be the prettiest death-dealer ever to walk the world of Tyria.

ArenaNet's best expansion yet is brimming with all the detail and character that makes Guild Wars 2 so special, and its approachability to solo players means nobody has to miss out this time around.

Whether it's speculative fiction, MMOs, or RPGs, Cassandra's on the beat. You can expect to see her covering Guild Wars 2, Baldur's Gate 3, and any other games with dungeons to crawl through.