Sunqua Peak, Guild Wars 2’s new Fractal of the Mists, is all about the elements. From its storyline to its appearance and every challenge it holds, everything hinges on earth, water, wind, and fire.

“Sunqua Peak should be a peaceful place – suspended in a storm-lit sky, with beautiful stonework and flowering trees to mark the path up the mountainside,” developer ArenaNet says. “But something here is wounded, and the elemental spirits need your help to heal their home.” I dive into a demo with the MMORPG’s devs to find out what’s up.

Our small band prepares for the challenge ahead with some gear augmentations: Agony Infusions, to guard against the game mode’s unique anti-healing debuff, and brand-new Abyssal Infusions. These are a reward for beating the Fractal and living to tell the tale, with Agony resistance and power-boosting properties, and a neat, swirly “abyssal aura” effect, too. Properly equipped, we gather at the mode’s mouth – a serene courtyard overlooked by a roaring orange eye. Think Barad-dûr meets Kew Gardens.

Inside, we tackle the dungeon run at tier one – the ‘training’ version to get our feet wet. Real heroes don’t need the distractions of all those Mistlock Instabilities, y’know. We tip-toe a stone path rising to Sunqua Peak as wind and rain batter the mountainside. Portentous. Elementals – mischievous foes themed after air, lava, and so on – appear on clusters of rock, suspended above a misty chasm below. It’s a Guild Wars 2 special, the jumping puzzle, but this time it comes with a difference: air is also the answer to progressing. 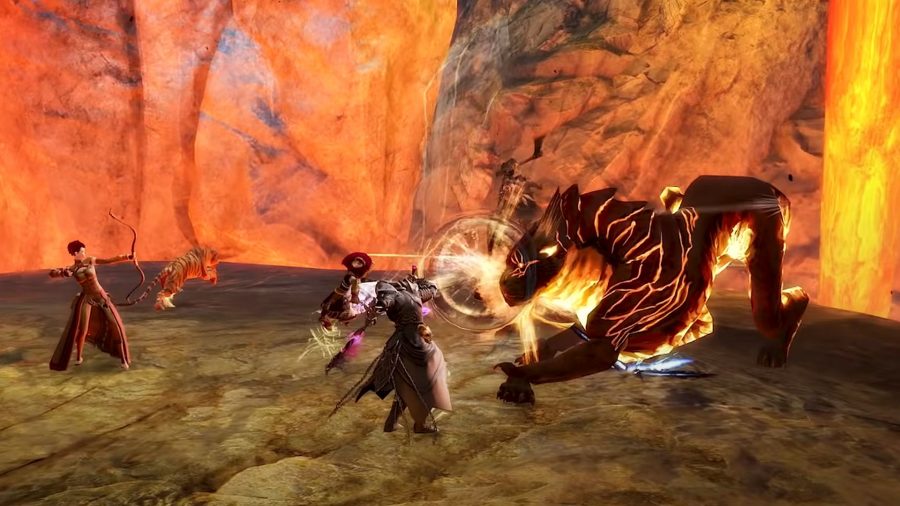 There are bursts of energy that pop up intermittently; I hop into one, and catch some air Tony Hawk can only dream of thanks to a temporary buff to my jump power. This recurs a couple of times in the run, and it’s such a laugh. The devs “huzzah!” our crew as we fire and flop ourselves up the mountain like ragdolls from a cannon.

The first boss we encounter is called the Voice of the Mountain. It’s a giant Air Elemental, and is essentially there to show you the Fractal’s ropes. It splays a bunch of overlapping area-of-effect attacks and glowing blue projectiles in certain patterns, teaching us how to tackle what’s to come. The secret? Just. Keep. Moving. And be grateful for the handful of healing turrets that rain life charitably onto our heads.

Along the way we tackle other elemental, ahem, complications. Waterfalls stop and start like sputtering taps, forming a gauntlet through which we must carefully time our runs. A stream of molten lava flows through a cave and I char my poor charr’s toes hopping across it. A rock formation engulfs an ally and we must hurry to blast them free. That’s all before we encounter another tough beastie: the Fury of the Mountain, a feline boss channeling all the fire and flames of a Dragonforce video. 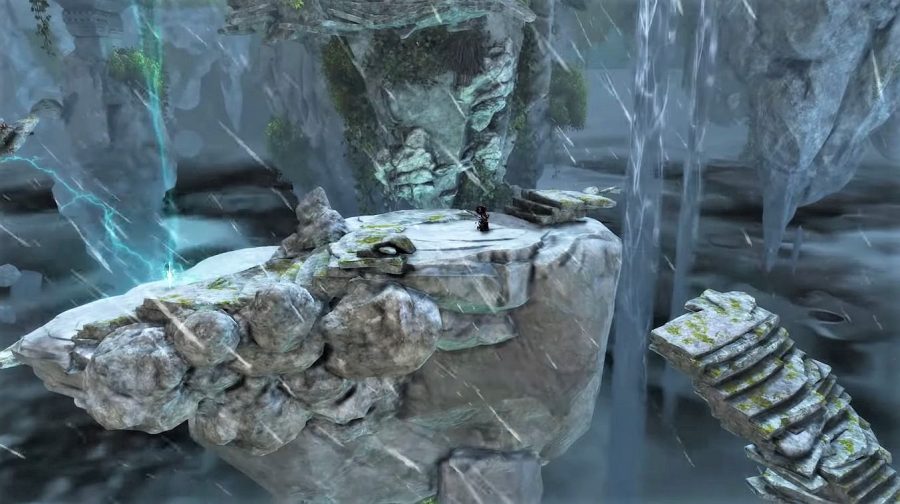 She charges around the (scarily small) volcanic arena on all fours, singling out teammates and lunging at them quicker than we can say ‘here, kitty-kitty’. In my wisdom, I choose to fight fire with fire very literally, and point my flamethrower in her direction. Somewhat surprisingly, it works very well, and she’s down for a cat nap in no time.

When we’re not getting mashed by elemental nasties or scorched, sandblasted, and spattered by the mountain’s hazards, the Fractal’s Canthan setting shines. It’s really pretty, with blossom trees, bamboo, and other nods to the region’s aesthetic style – even though all the game’s Fractals exist in their own pockets of time and space, ripped from the real world (hence their infinite replayability, or so Guild Wars 2 lore goes).

There’s even a lovely garden sanctuary where you can take a breather, filled with books, hidden secrets, and messages carved in virtual stone. These tap into the Fractal’s story, but also have resonance beyond the game. The devs tell me this serene space is also a way of commemorating the difficulties the team has faced both personally and professionally in the wake of the COVID-19 pandemic. 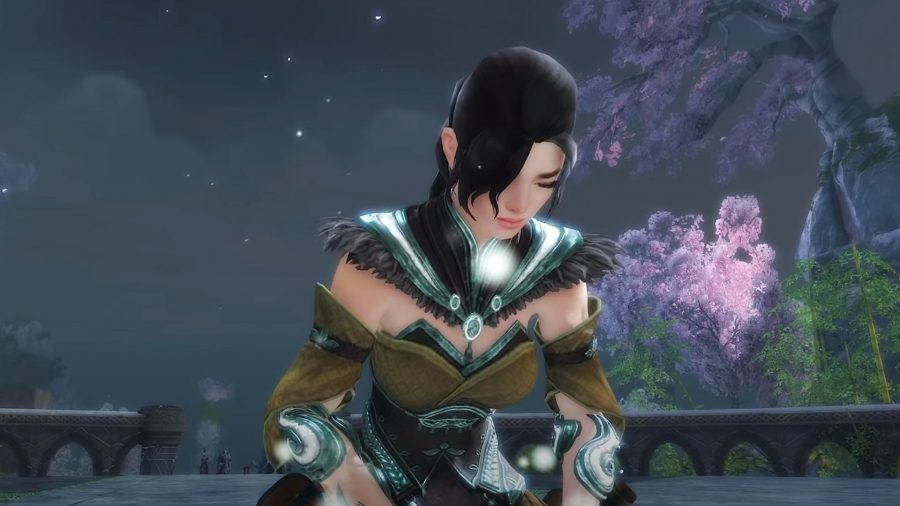 Fractals are a special type of dungeon strictly for endgame players, and as soon as we’re out of the sanctuary it’s clear that this is no merry jaunt through the Ascalonian Catacombs. We’re soon plunged straight into the big boss battle: a fight with the “wounded” troublemaker at the heart of this mess. And, boy, are they a diva in need of a hot chocolate and a long cry. I won’t give away too much about the fight, but know this: the Fractal’s chief boss both ‘channels the elements’ and ‘is wracked with grief’. So, they’re hugely powerful and a little on edge.

Boy, is the big boss a diva in need of a hot chocolate and a long cry

As the first hint implies, the boss uses a combination of all the elemental powers encountered during the Fractal, plus a few new ones for good measure. Even at tier one, it’s a tough, very mobile encounter. Sure, you get a warning of impending attacks through Guild Wars 2’s usual colourful markers, but only for a breath – and in practice the effect is a little chaotic. Rings of elemental energy form lines up to the walls and explode, confining me to my slice of the dancefloor. Aqueous cannonballs then carve waves of damage across that slice in all directions. Bursts of energy launch me into the air just as I’m trying to pop a sweet shot at the boss’s noggin. I scramble to hide from arena-engulfing explosions.

The battle features the boisterous fun of earlier mechanics, too. A storm gathers over our heads mid-scuffle, and to dispel it we fling ourselves into the clouds via some handy launch pads. (I might have squealed “wheeee!” like an overgrown charr cub in the process.) Battering the boss’ health takes time and everything we can throw including the kitchen sink, but it’s enormously enjoyable. 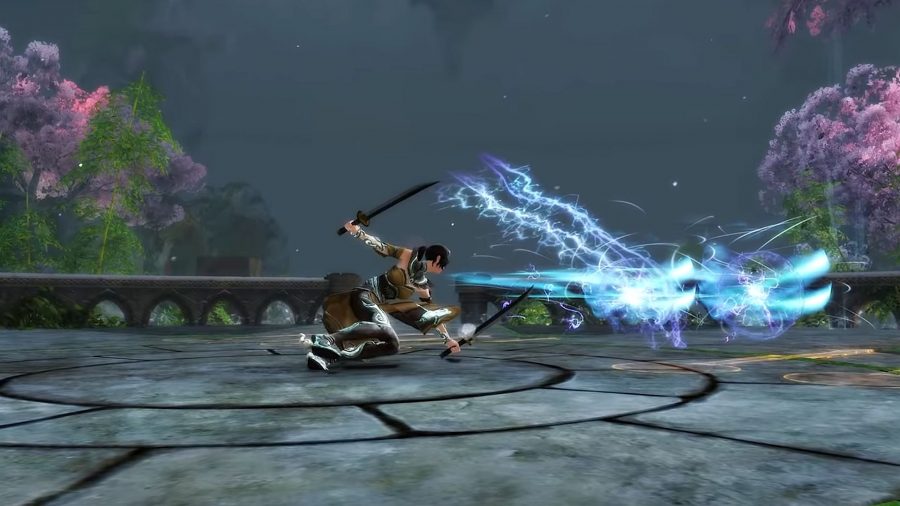 There are plenty of rewards for beating the Fractal, like an exclusive ‘Abyssal Fractal’ weapon set, Endless Inner Demon Combat tonic (apparently we all have an inner demon), an Abyssal Infusion chest, Unstable Fractal Essence, brand-new achievements, et cetera, et cetera, but a conclusion to the mission’s story is not among them. We’re left with a cliffhanger, and the devs tease there’s more to find out – but alas, our time is up. The rest remains a mystery for now. The Fractal lands in-game today, so go get stuck in to find out.