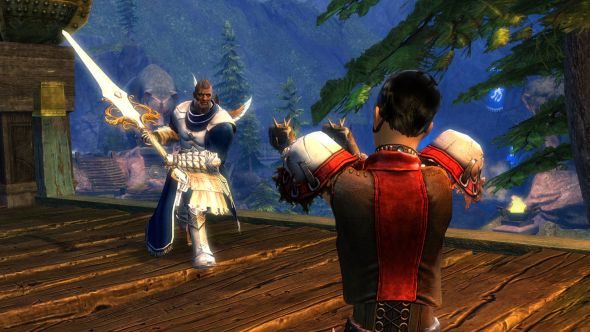 See our original coverage of the episode’s announcement (below) to catch up on what’s set to unfold.

We got to have a quick hands-on with Flashpoint over the weekend. The thermal tubes that flung you around Ember Bay and Bitterfrost Frontier return in a new environment within a familiar zone, and there’s an all-new mastery with which you can pull yourself through the air on a Batman-esque grappling hook.

The new episode also sees the release of legendary armour, set to be “the ultimate armour in all of Tyria”, and something for which raiders have been asking for a while. After clearing the Bastion of the Penitent raid, speak with “the only living thing remaining” to obtain it. Check out this blog by Guild Wars 2 producer Paul Ella for more on legendary armour.

There’s also onehellof a twist concerning Lazarus, but we won’t spoil that for you. Suffice to say that the stakes are building nicely for an epic conclusion to the season. Best of all, it’s never been easier to get into one of gaming’s most generous MMOs, as the Heart of Thorns expansion has just permanently dropped in price.

Original story April 25, 2017:The penultimate episode of Guild Wars 2’s Living World Season 3 is releasing on May 2, bringing MMO players into a battle that needs to be fought from “two fronts”. Flashpoint, as the episode is called, will pit players against a new foe while wrapping up the conflict from the last episode.

News of a machine that can defeat the Elder Dragons means that battle is finally almost won, while Lazarus – the powerful mursaat who pretended to be an ally – has revealed his true nature. Players are promised a threat unlike anything they’ve faced before.

If you’re thinking of jumping in based on the strength of the new trailer above, Guild Wars 2 has now permanently dropped in price. Every edition of the game has been reduced by $20, so the standard edition will now set you back just $29.99.

Season 3 content is intended for level-80 characters, but new buyers will get a one-off level-80 boost for a single character. This will let you jump into the new content, as well as all the stuff that’s come before.