As previously reported, the worryingly productive ArenaNet has gone from plopping out Guild Wars 2 update eggs once a month, to once every three weeks, to once every two weeks, which is twice a month, which is twice as much as once a month. That’s loads of updates. 100% more updates. They’re update crazy. But here’s another thing they’re doing: ArenaNet is opening its virtual backdoors to reveal the inner workings of Guild Wars 2’s code to its player base, allowing coders access to previously hidden, live server data. Why? So that players can build cool things using said data. Like web apps, or mobile phone apps, or fun infographics.

By opening up the game’s API to players, ArenaNet can allow their own giant community to build useful tools for Guild Wars 2, says lead content designerMike Zadorojny. Presumably freeing up the developer’s own workforce to continue creating their endless billions of updates and events.

“We have a team working on exposing some of the code to the player base,” says Zadorojny. “We have APIs the players can tie into. The fans are already working on a Google Maps for Tyria that lets you zoom in and see what’s going on at the individual map level. We’ve exposed what events are running and where they’re running too, so say you’re on Metrica Province, you’ll be able to determine what events are on right now and where they are at that location.

“If you want to know the current World versus World status and who owns what towers and keeps,” he continues, “all that information is being exposed. We’re going to keep adding new features and exposing more code.”

The API tools are extensive enough, claims Zadorojny, to allow for the development of fan-made iOS and Android apps. ArenaNet’s newfound focus on rapidfire updates, on the other hand, seeks to transform Guild Wars 2 into something approaching a live experience. More “like a television show”, with short narrative arcs and events shaped by actual player involvement in the fortnightly updates.

“When we originally did the dynamic event system we were thinking about how we could take the traditional quest and make it more co-operative, more enjoyable, to have it have more of an impact on the world,” explains Zadorojny. “As we launched the game and we started supporting it we realised we could take it one step further.

“Now we’re seriously looking at how the world changes based on player interaction. That’s why we’ve been moving towards this more frequent build structure. We’ve got four teams building content that will be coming out every two weeks, because we want to create a true living world that reacts to what the players are doing as much as possible. That’s kind of been the holy grail for MMOs. If you can have enough engaging content, you keep the player excited and challenged. They’re always going to have something new every time they log in. That’s really the impetus behind what we’re doing.” 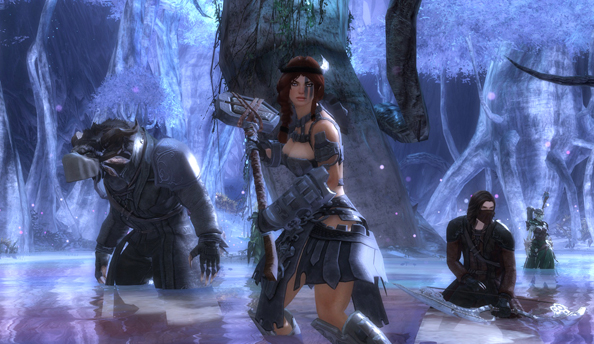 The accelerated frequency of updates has the bonus effect of turning Guild Wars 2 into a constantly updating and evolving story, one that’s episodic by its very nature. Teams at ArenaNet are not only working on individual content updates, but often they’re aligning their efforts with the game’s overarching plot. It’s a bit like Breaking Bad. Sometimes you’ll have an episode where they chase a fly around. Sometimes you’ll have an episode that boots the plot a hundred yards down the road. Except here it’s little bunny eared dudes instead of meth cooks.

“We have this long term road map of where we’d like to see the game going, from a story standpoint,” ponders Zadorojny. “Our narrative designers put that story together. When a team sits down to work out what they’re going to be building over the next three or four months, they have creative freedom to pick and choose what they do. These teams are not just building the content for the release, they’re also building towards that story goal.”

Case in point, the game’s next updates sees theSky Pirates(sky pirates!) hosting the arrival of a new airship, in which a permanent new jumping puzzle will reside. Following that will be a plot-progressy July updateconcerning the loss of a member of the Lion’s Arch Council, and what happens following that whole ordeal. If you really want to peel back the narrative curtain, the whole lot ties into the upcoming Guild Wars 2 novel, Sea of Sorrows. There arelayers, you see.

And if ArenaNet mess up an update? Well, the fast turnaround of events and content helps them out there too.

“We look at metrics to see where players are spending their time and what we’re doing,” says Zadorojny, “and that influences what we’ve done since the last release, but in the future the idea is to take this strategy to allow the players to more overtly give us their feedback and control some of the destiny of where we’re taking this world. The cool thing about it is that it allows us to try new things. If players don’t like something, two weeks later it’s gone, we can learn from it.”