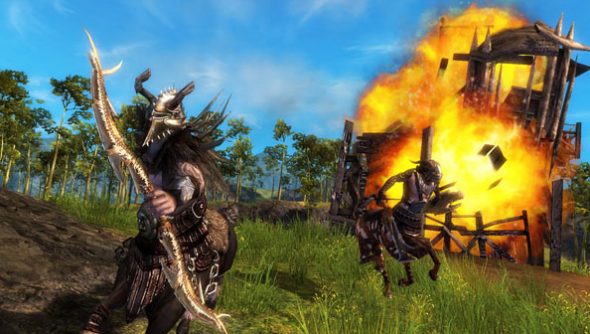 FOV is an acronym you’ll either be ignorant or acutely aware of. Like first-person head-bobbing, particularly narrow Fields of View – i.e. the amount of game world visible on screen at any one time, affected by aspect ratio – can leave some players feeling nauseous enough to make certain games unplayable.

Guild Wars 2 is a particularly notable offender, featuring an FOV angle of 65. That’s relatively tiny, and both a figurative and real headache for those using widescreen monitors. And while some games allow you to fiddle with FOV to suit personal preference, GW2 is not among them. But! ArenaNet are working on it.

“We’re in the middle of working on additional fixes for the FOV,” said game director Colin Johanson on the GW2 forums. “We’ll have an update on this very shortly. We’ve been doing some very promising tests internally, will role out more info soon once we’re sure everything is working!”

Until now, using mods to reshape the game’s FOV to a more conventional* 90 have been a bannable offense. Some players have resorted to running the game in a window as a workaround, squashing the screen to a more comfortable aspect ratio.

Do you experience nausea at particularly low or high FOVs? Another recent offender was Dishonored, which featured a FOV slider with an upper limit of 85. Here’s how to fix Dishonored’s FOV.

*For us PC gamers, who tend to sit closer to the screen than our console brethren and therefore require larger numbers for our FOV.