NB: This post was guest-written by one Geralt of Rivia, gruff-voiced star of The Wicher 3 and world-class Gwent player. (It is also a review of The Witcher 3’s Gwent, not to be confused with standalone Gwent card game.)

Ever since Gwent started appearing in taverns throughout the Northern Kingdoms, people have been asking, “Geralt, is this the new Dice Poker? Is this the future of gaming in the North? Are you going to kill that ghoul that keeps digging up the mass-grave next door, or are you just going to sit there playing Gwent?”

With Gwent arriving on the scene, it looks like Foltest may not be the only king to be slain this year. Dice Poker, the king of mainstream gaming throughout the north, might finally be dethroned by this hobbyist upstart.

I’ll admit: I thought I’d never get tired of Dice Poker. True, there were always snobs who felt it wasn’t much a strategy game. “Geralt, you always just re-roll to your highest matched set.” I even wrote a modest article on high-level poker strategy called “Forget the Full House” which, some have said, revolutionized standard play from a two-pair position.

Yet I fell out-of-love with Dice Poker in the last year. Critics would say it’s the same game year after year. That was part of it, but the game’s quality was declining as well. For one thing, I started having a difficult time rolling the dice so that they all stayed inside the playing-area. I kept fumbling the dice and dropping them on the floor, which is a game-killing issue. For another, I jumped on the “Arm Wrestling” bandwagon (don’t remind me of the 90 I gave it in Viziman Gamer, please!).

I was skeptical of Gwent at first. Card games don’t have a great legacy here in the North. I think we all remember the Sex Card Game craze that swept through here a couple years back. But with Gwent, Northerners might finally have a card game worth playing. 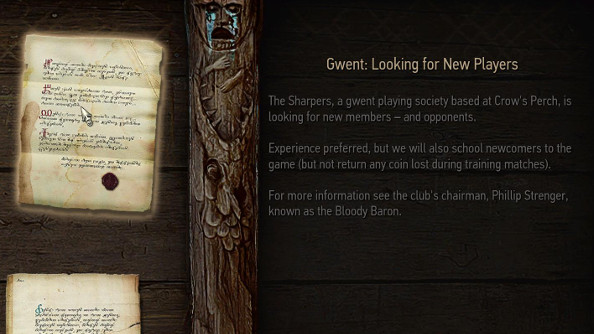 The rules to Gwent seem complicated at first, but they’re pretty straightforward if you think about them. Complicated is when you move in with the love of your life, only to discover that you were basically married before you got amnesia, had a kid you were raising together, and none of your friends thought to tell you about it.

In Gwent, you and your opponent take turns deploying an army in battle, using cards with special abilities and combat values. Each card goes in a different row to represent the line of battle: the front-line melee line, the ranged and archery units behind them, and the siege lines behind that. But Gwent is more realistic than a typical card game, because you only get ten cards in your hand at the start of the game… and you have to make them last for all three rounds of the game. So if you commit everything you have to win round 1, you won’t be able to win the next engagement. It’s a very realistic simulation of modern warfare. Just think about Henselt’s invasion of Aedirn, when Henselt threw everything he had into into the assault on Vergen, only to have his army fall apart a short time later. 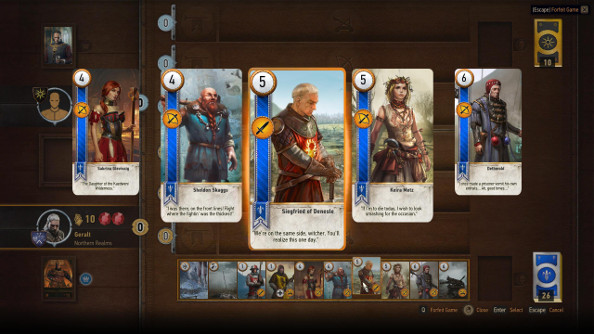 The card graphics are great, too. Gwent features some of the most realistic characters, and especially faces, that I’ve ever seen in a game. It’s a huge leap forward, and will have you wishing someone would make a new version of Dice Poker with similarly advanced graphics.

Yet Gwent also seems… I don’t know. This is hard to put into words. Sometimes I feel like you don’t win based on skill or even the luck of the card draw, but based on whether you’ve spent money on special cards and leaders. Even more diabolical, many of the merchants you play against will sell you new cards and leaders right there on the spot! So after beating you simply because they have spent more money on their deck, these same merchants will then offer to sell you better cards, for some truly outrageous prices!

But Gwent is still a good value proposition for players who don’t want to spend 60 crowns on a strong card. A lot of merchants will give you a new card if you beat them, letting you expand your collection just by playing the game.

I don’t know why they do this. I don’t give anyone a card when I lose a game. But I don’t know if I’m supposed to lose a card, so I end up just running away from the table after a defeat. I recommend new players do this. Just make sure you have a good excuse ready, in case someone calls you on it. “Sorry I had to run, I had some witching to do,” is an evergreen explanation. “I had amnesia” is another winner. 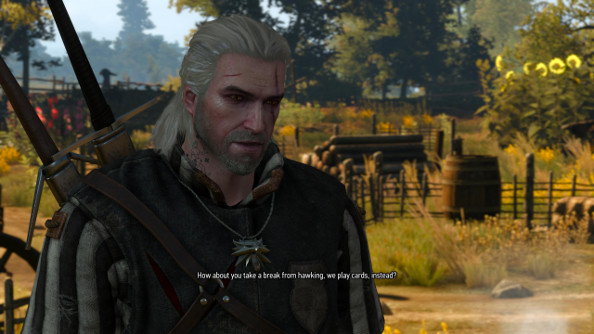 Gwent can’t be beat in terms of fun-factor. But the one thing that makes me hesitate is the community around the game. It’s kind of dead at the moment, and while I can’t blame Gwent for the fact that half the population of the North is either dangling from a rope or being eaten by rotfiends, you can’t expect to just walk into a town and find lots of good opponents. Nor is there much discussion of Gwent on the message boards, which are filled with off-topic posts like, “Drowners slaughtered my family, pls help.”

In the end, Gwent isn’t for everybody. Most players will probably stick with Dice Poker or Cowering in Fear, but fans of the under-served strategy genre will find something to sink their teeth into with Gwent.

Geralt of Rivia is a professional monster-slayer, a contributing editor at Dice Poker Quarterly, and the author of The Mutant Gourmet: Thrifty Dishes for People Who Can’t Get Food Poisoning. He lives in the the Northern Kingdoms with his Wolf medallion.

And here’s our review of The Witcher 3: Wild Hunt. Geralt was unavailable for that one.