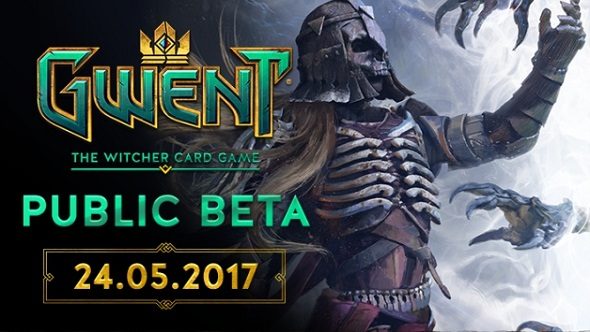 Following the success of the closed beta and the recent Gwent Challenger event, CD Projekt have announced that the open beta for their collectible card game Gwent will begin on May 24. To ensure that this beta has everyone starting on fair footing, player progress and card collections from the closed beta will be reset on launch day.

If you’re looking to start playing Gwent, check out our list of the best beginner decks.

Don’t worry if you did spend money during closed beta, CD Projekt have you covered. Players will receive Card Kegs equal to the amount they bought with real cash when they fire up the open beta. Players will also receive all end-of-season rewards and any cards that were gifted to them by CD Projekt, like the premium Geralt card.

They’ll also get two Card Kegs for each rank they surpassed during the closed beta, as well as two Card Kegs for every five levels they achieved. If you were a serious player during the closed beta, chances are you’ll be starting with quite the stack of cards once you boot up Gwent next Wednesday. Perfect for crafting new decks and crushing the wave of novice players.

As there will be a technical transition period as Gwent moves from closed to open beta, the servers will be offline from May 22. Both the Gwent Facebook and Twitter pages will be updated with the current server status, so keep an eye out on those if you’re really hankering to play some Gwent.