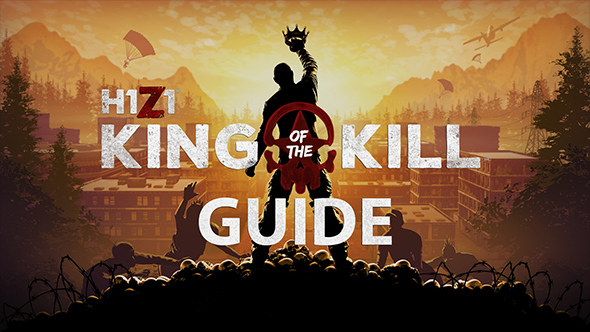 By name, H1Z1: King of the Kill might sound similar to a playground game you used to play, but trust us, it’s a far cry from the skirmishes of your youth. Instead of grazed knees and grass stains you’ll be competing with nearly 200 bloodthirsty survivalists, all armed to the teeth with machetes and assault rifles.

Mechanically, you won’t find much to differentiate H1Z1: King of the Kill from PlayerUnknown’s Battlegrounds. You still parachute in with nothing and scrabble for guns, gear, and vehicles upon landing; you still spend minutes hiding in bushes waiting for everyone else to eliminate each other; you still flee from an encroaching storm of death that forces everyone into the same small fighting zone; and both games randomise loot and safe zones. Starting out can be pretty intimidating, but simply knowing the map, weapons, and learning when to hold fire is often enough to get you into the top ten – that’s why we created this indispensable H1Z1: King of the Kill guide for you to pore over. 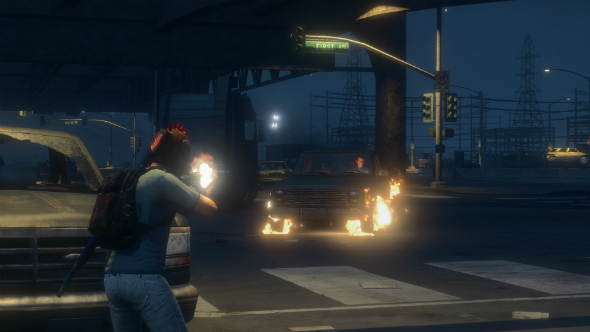 You can do a great deal to improve your chances of placing highly before even jumping into a match. H1Z1: King of the Kill isn’t a graphically intensive game, but it is network intensive, which means you might experience a lot of lag unless you’ve got a decent internet connection.

You can lighten the load by turning your graphics settings down, especially your render distance. While there are times when you’ll want to increase the render distance – such as during your parachute drop when you’ll want to spy vehicles and buildings from up high – you can generally make do with it set to between 500 and 1,000. The reason for this is that enemies only render in at 500, so if you need to give your framerate or ping a little boost there’s no reason not to drop the render distance down to 500 the second your boots hit the ground.

Make sure you also have Effects Quality and ParticleLOD set to at least two, as these will ensure you can see dust and blood that’s kicked up from your shots, allowing you to judge range and confirm hits.

H1Z1: King of the Kill lobby

While matchmaking is loading all 200 players into a game, you could be forgiven for thinking that the lobby is just a place to run around, punch people in the face, and race quad bikes. It is, but it’s also a chance do some light inventory management and crafting. Before any of that, however, you’ll want to smash Alt+M in order to mute voice chat – it’s really important for your sanity that you heed this advice. Trust us, we speak from experience.

When you enter the lobby, you’ll have roughly a minute to open up your inventory (Tab) and shred of all your clothes. You’ll then have a load of cloth, with which you can craft a satchel. Yes, you’ll be naked save for a fetching pair of briefs, but you’ll also have significantly increased carry weight before the match has even started.

H1Z1: King of the Kill parachute 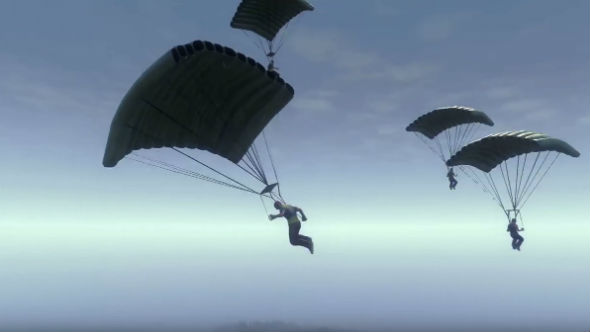 Dropping into the map in H1Z1: King of the Kill works a bit differently from PlayerUnknown’s Battlegrounds: you still control your parachute, but you don’t decide when to exit the plane. There’s also no skydiving phase, so there are a few movement tricks you can use in order to distance yourself from other players and give yourself a fighting chance.

The first is to simply angle your parachute straight down in an effort to be among the initial few people to touch ground and hoover up as much loot as possible. Alternatively, you can scan the horizon to pinpoint vehicles or quieter locations such as campsites, minimising the risk of running into anyone else until you’re able to grab some decent equipment. Finally, you can swing your parachute from side to side on your way to a distant point of interest, which allows you to build up momentum over more time-consuming descents.

H1Z1: King of the Kill gear

Once you’ve ditched your parachute you’ll want to seek out the nearest building. Once you’ve found it, get inside and start hunting for items as fast as possible, especially if you’ve dropped into a busy area.

The first thing you want to get hold of is a gun and some ammo, then you’ll want a backup weapon to switch to instead of reloading – it’s faster and will save you many times over the course of your H1Z1 career. Weapons and gear are randomly scattered throughout buildings, so you’ll have to scour a few houses and shops to find everything you’re looking for.

After picking up a couple of guns, you’ll want to grab a backpack and at least a couple of helmets, before moving on to Tactical First Aid Kits and clothes, which you can shred for extra Field Bandages to see you through multiple shootouts. Once you’ve got a decent gun, something to heal yourself with, some extra carry weight, and a couple of helmets you’re pretty much set.

H1Z1: King of the Kill weapons 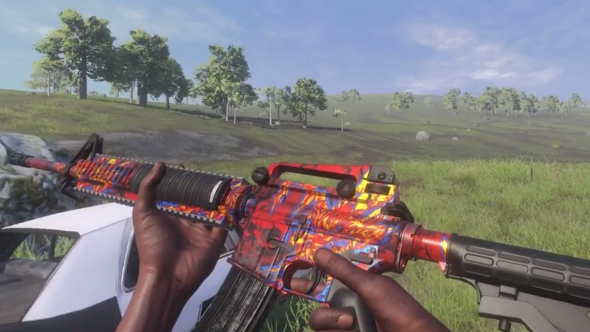 AR-15
Ammo: .223 round
Single-fire assault rifle that’s excellent for long-range engagements thanks to its low recoil.

AK-47
Ammo: 7.62×39 round
Full-auto assault rifle with high recoil. Very effective in close-quarters if you can keep it under control.

12GA Pump Shotgun
Ammo: 12 gauge Buckshot Shell
The perfect close-range killer, the 12GA Pump Shotgun deals out heaps of damage with each shell. Switch to this when you’re scavenging for supplies in buildings.

.308 Hunting Rifle
Ammo: .308 round
This is the gun everybody wants. Unfortunately, you can only grab one from an airdrop. It’s the only scoped weapon in the game, which gives the wielder an immediate advantage over everyone else. 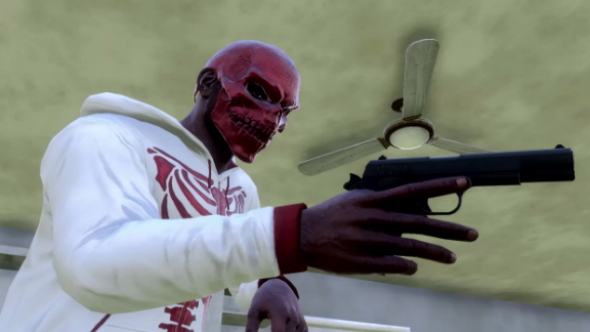 R380
Ammo: .380 round
Only marginally more effective than melee, the R380 suffers from low damage and a small clip size. It’s only worth picking up if there’s nothing better nearby.

M1911A1
Ammo: .45 round
Solid damage makes the M1911A1 a reliable backup if you’ve not managed to find a second primary weapon or need to finish off a wounded foe.

.44 Magnum
Ammo: .44 round
As you’d expect from this famous hand cannon, the .44 Magnum excels at killing whatever it’s aimed at. It’s set apart from other pistols in the game by its effectiveness at range – there’s next to no bullet drop. The .44 Magnum is also handy against vehicles, so be ready to equip it the second you hear a car or ATV.

M9
Ammo: 9mm round
The M9 is an all-round sidearm that offers decent close-range damage, a large clip size, and an impressive rate of fire.

H1Z1: King of the Kill tips

We won’t lie to you: winning a battle royale is tough. That’s why we’ve prepared these helpful H1Z1: King of the Kill tips to keep you in the game until there’s only a few players left. 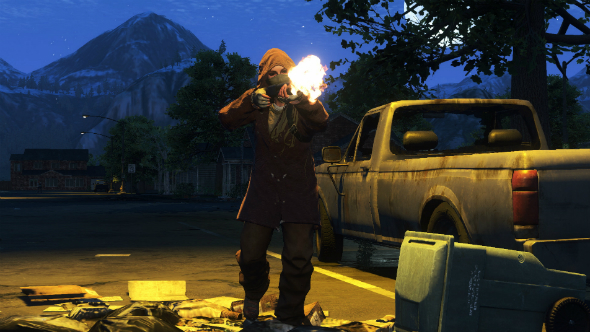 As you can’t choose where you drop into the map in H1Z1: King of the Kill, avoiding the mad rush for weapons and gear at the start of each game is key to surviving until the end of the round. If you can spot a car or ATV from the sky, aim to land as close to it as possible and then drive it as far away from the centre of the map as possible. You’ll be able to find weapons later on and having a vehicle means you’ll be able to reach undisturbed spots on the map and grab plenty of good gear. It also lends you an advantage when it comes to reaching the safe zone.

Combat in H1Z1: King of the Kill feels very basic at first, but it’s not without its subtleties. For example, when engaging enemies over long distances you have to account for bullet drop and aim ahead of moving targets, relying on only a simple, single-dot crosshair for feedback. Therefore it’s best to get used to the shooting and rack up a few kills before trying to go for a win – you’ll rank low and die quickly, but it’s the only way to improve your weapon handling. Once you start to feel more comfortable in shootouts, you can start hiding around in bushes and biding your time, safe in the knowledge that you’ll be able to kill anyone who passes by.

When to switch between first and third-person perspectives 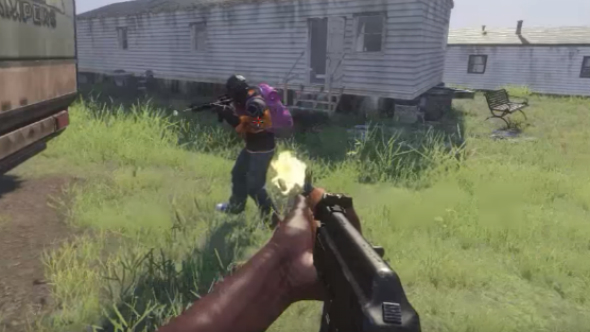 In case you didn’t know, you can switch to first-person mode in H1Z1: King of the Kill with the T key, but you’ll only want to toggle between the two viewpoints in certain situations. The standard third-person view is generally the best option as it allows you to spot enemies around you, peek around corners without being seen, and allows you the best possible view of whoever you’re firing at. You’ll definitely want to switch to first-person mode if you’re sharing a car in Duo or Squad mode as it’s very easy to accidentally shoot a teammate while firing from the passenger seat. First-person mode is also very handy for close-quarters situations, particularly if you’re using the shotgun, which can be difficult to land hits with when your target is moving around unpredictably.

As in PlayerUnknown’s Battlegrounds, a building with an open door means one of two things: either that building has already been ransacked and abandoned, or there’s still someone lurking inside, watching you through a window. Open doors are very rarely worth approaching at all. Of course, that doesn’t mean a building with a closed door is safe and vacant, so be sure to check for silhouettes and signs of life before heading inside these too.

Headshots are nearly always fatal in H1Z1: King of the Kill, so having some serious noggin protection is key to surviving shootouts and sniper fire. There are no levels of gear in H1Z1: King of the Kill – a basic motorcycle helmet is just as important as a military one – a helmet will soak up a single headshot from an assault rifle before breaking. You’ll want to carry around at least one spare helmet to switch to should your first one break.

Arriving late to the safe zone is often helpful

You can survive the poisonous green gas that rolls across the map for a long time, and while the majority of people will be duking it out within the safe area you can carefully make your way to the border and even score some easy kills. It’s wise to carry around a Tactical First Aid Kit or some Field Bandages with you to heal up once you make it inside the safe zone too. You can also rely on the fact that you’re probably the last one to make it to safety, meaning you can concentrate on the action in front of you instead of routinely checking your six.

Got any pro tips that have helped you win matches? Let us know in the comments below.