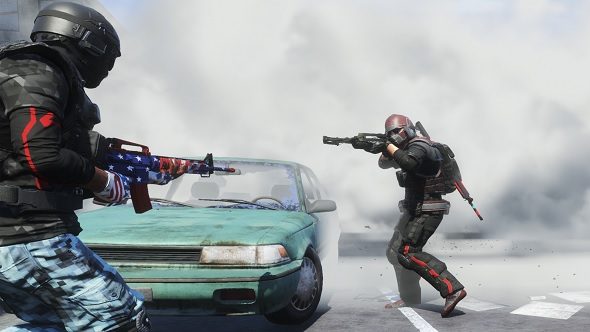 Update May 21, 2017: Developer Daybreak have released a short video, explaining all of the new additions in H1Z1: King of the Kill’s latest update.

Along with breaking down the long-awaited hit registration and shotgun fixes, Daybreak have highlighted all of the other changes that have arrived in this update to their zombified battle royale. The three new Points of Interest added to the Arena map are a shipping yard for close-quarters combat, a mountainside community for tense area defence and a strip mall for protracted, cover-based shootouts.

Want to practice your aim? This list of top PC shooters should sort you out.

The pick-up truck, the ATV and the offroader have all received brand new skins, so new players can better distinguish between a piece of scenery and a working vehicle. Finally, Skirmishes are back to provide greater variety for players jumping back in on the weekends. These matches have special rotating rulesets, where weapon types are limited and there are special safe zones. The first Skirmish is Shotties and Snipers and it’s active until the end of today.

For a full list of all of the new additions and bug fixes for King of the Kill, check out their official patch notes.

Original story April 30, 2017: One of the main players within the burgeoning battle royale genre, developer Daybreak have announced details of the next patch for H1Z1: King of the Kill. Focused mainly on quality-of-life improvements, this update hopes to optimise hit registration, declutter the game’s UI and refine the Arena map.

With a single shot possibly ending your life in King of the Kill, it is quite important that when you fire a gun, bullets go exactly where they are supposed to. Before this update, players noticed problems like accidently shooting their driver when firing out of the passenger window, which is obviously a major issue. In order to improve King of the Kill’s hit registration, Daybreak have been performing widespread server revamps to first improve general server performance, before actually going into the backend and tuning the hit registration code. Both of these tweaks should ensure that not only are you not killed by enemies suddenly teleporting round corners due to a desync, but your shots should actually hit the enemy you’re aiming at.

After fixing hit registration, Daybreak have rebalanced the shotgun in order to address its design inconsistencies. Rather than firing out a random pattern of eight pellets, shotguns now fire out a systematic pattern of 17 pellets. This change will ensure that when you shoot an opponent at close range, you are guaranteed to do damage. While a buff at short range, this larger pellet cloud means that more projectiles are likely to miss when firing at a target from a long distance.

In the Arena map, interiors are a little less dingy thanks to a lightning change and three new Points of Interest have been added to the Pleasant Valley area. Lootable objects now have a small outline when hovered over, speeding up looting as players can instantly tell what can and can’t be shoved in their backpack.

Finally, King of the Kill’s inventory UI has been vastly improved, with Daybreak putting both the inventory and crafting menus onto one screen. When combined with players now having both their locked and unlocked crates in one place, inventory management should become much faster.

If you want to test these changes for yourself, jump into the Test Server and see what you think of the improvements. H1Z1: King of the Kill is available on Steam Early Access for $19.99/£14.99.