In the bowels of E3, we’re at the mercy of zombies. Not sleep-deprived, hungover journalists, but the rotting, walking cadavers that populate SOE’s new post-apocalyptic survival MMO, H1Z1.

It’s a single server, no resets and 64 square kilometres (at the moment) of forests, deserts, towns and zombies. And at first, it sounds a lot like DayZ. That was always going to be the hurdle for SOE, that immediate comparison that everyone leaps to.

But this isn’t DayZ, and ex-Counter Strike pro, now H1Z1 senior designer, Jimmy Whisenhunt offers plenty of reasons why the two games are different and can co-exist.

“In the beginning, we just wanted to do sandbox games,” Whisenhunt says. It’s not about the simulation. Where DayZ is concerned with simulating almost every aspect of being a rugged survivalist in the post-apocalypse, H1Z1 has sim-like elements, but only because they make sense for their growing sandbox and not because they happen in real life.

So there’s hunting and needing to boil water from lakes before drinking it and weather concerns like drying clothes when it gets wet or cars struggling when the ground is sodden. But those micro simulation features are somewhat overshadowed by the big systems SOE is developing.

There’s the circle of death, for example. There are wolves stalking the wilderness. Like humans, they don’t want to eat decayed corpses, so they hunt humans, and humans might hunt them too. But they’ll ignore zombies. Zombies, on the other hands, aren’t picky, and will happily chow down on animals and humans. “So occasionally you’ll see them fight,” says Whisenhunt. “Wolves will chase off deer. Zombies will chase both.” 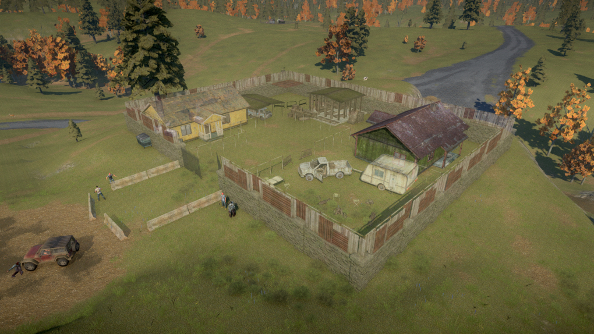 And H1Z1 doesn’t just present a living world, where zombies, beasts and other players are waging a three-way war, it’s a properly persistent one as well. If one player is chopping down a tree, anyone in the area will hear it or see it fall. And when that player turns the lumber into a building, everyone can see that too.

While player-constructed buildings will be permanent features, they might not be permanently lived in. “Once you start building these fortresses and the governor’s mansion and all that stuff, eventually resources are going to start getting scarce,” says Whisenhunt. When that happens, a migration to a new area, with more resources, might be necessary. Resources will be replenished, and even trees grow back, but not through server resets. Whisenhunt explains that resources can move around and new goods can enter the area.

The point where players can construct mighty fortresses is far from the beginning though. It takes a long time and some teamwork to reach that point. It’s not the end game, though, as Whisenhunt notes that there isn’t really a traditional end game. “That part of the game [end game] isn’t something we want to direct or touch all too much, because there is something to be said about doing what you want and having that player interaction experience.” 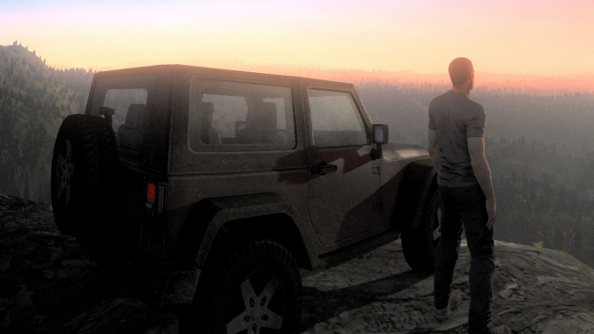 With base-building being an integral element of H1Z1, crafting hasn’t been given the short shrift. Instead of throwing a long list of craftable objects at platers, SOE has developed a discovery system akin to Star Wars Galaxies. Whisenhunt takes a log he’s just gained from chopping down a tree and drags it into the system. He’s discovered a wooden plank. Doing the same with the plank, he discovers a wooden stick.

Not such an impressive discovery, but he’s already expanding his crafting list this way, and it opens up new possibilities. With this stick, he can construct an animal trap. With cloth, he’s able to turn the stick into a torch. And that torch is going to be important, because nights in H1Z1 is extremely dark, and SOE is making an effort to ensure that players can’t simply crank up the gamma.

The crafting system offers much more than the ability to craft simple objects, though “We also want you to be self-sustainable, not in the very rugged way – which you can if you want – but you can also build things like dew collectors,” Whisenhunt tells us. And of course, there are the buildings. Walls and roofs can be laid down with purpose, but there are also pre-fabricated buildings one can use for storage. 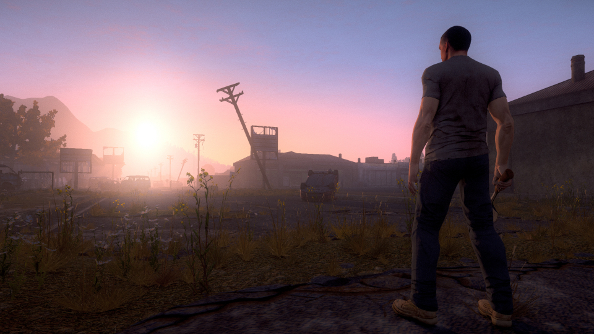 Another place where DayZ and H1Z1 potentially diverge is their definition of hardcore. It doesn’t equate to a game being complicated, says Whisenhunt, it’s all about consequences. “The difference in our take on the game is A) size and B) the direction of threat. We want players to be dangerous, but we also want there to be more consequences in killing other people.”

And killing people isn’t going to be easy. The shooting is tactical, not twitchy, with guns not snapping back to centre. SOE is still working on prone and lean – which is already in-game – developing them so they are a bit broader. Lean, for instance, doesn’t just help survivors peek around corners or out from cover, it also means they can dodge blows if a maniac starts punching them.

So players are deadly, but so is the environment; one that contains wild animals, zombies that are a real threat, and of course fire. H1Z1 really has a thing about fire. “That’s my favourite part,” Whisenhunt says when asked if zombies are flammable. No doubt it smells like victory.