Update 8 Jan, 2016: Laidlaw has confirmed to us that the e-mail is genuine.

We’ve just received an e-mail from Marc Laidlaw confirming that the e-mail posted on Reddit is genuine and he has indeed left Valve to pursue other endeavours. He didn’t give any more information than that. Original poster TeddyWolf was also kind enough to forward the e-mail on to us just beforehand, and it certainly checked out.

Two of the best FPS games ever made might be all we get out of Marc, then.

For the sake of proof, here’s a screengrab of what Marc sent us. Not the longest e-mail we’ve ever received…

The use of “confirm” was my word choice in the original e-mail, not that I expect that’ll dissuade the half-tin hatters from assuming it’s trying to say something else. He also responded to a follow up question regarding how long it had been since he left the company thusly:

“Just ‘recently.’ Took me a while to write the letter.”

Good luck to Marc in whatever he gets up to next.

Original Story 8 Jan, 2016:Rumour has it that Marc Laidlaw, lead writer of Half-Life among other things you’re probably less famliar with, has quit Valve. In fact, it’s a rumour he’s creating himself. It comes from a Reddit post where a member of r/HalfLife contacted the lead writer with the same old question – what’s the deal with Half-Life 3 and wouldn’t it be better if Valve just came out and said it isn’t happening? The reply he got was lengthy, but the gist of it easy to understand: Marc doesn’t know, because he doesn’t work there any more.

The full thing’s over on Reddit, where original poster TeddyWolf is providing as much proof as he can that it’s not fake, including forwarding the e-mail to moderators who have confirmed its validity. I’ve sent him a message to do the same to me, but presumably he’s asleep, resting off a nice bout of setting the gaming world on fire. We’ve also e-mailed Laidlaw himself, just in case he has anything to add or a more concrete confirmation.

Laidlaw starts his e-mail by saying “the rumour” is true, but that he doesn’t know if there is a rumour but he might as well cover his bases. There certainly is now, mate. He goes on to give this very specific description of what he means by retired:

“I am no longer a full or part time Valve employee, no longer involved in day to day decisions or operations, no longer a spokesman for the company, no longer privy to most types of confidential information, no longer working on Valve games in any capacity.”

That’s fairly clear as to its meaning. He cites his age as the main reason he wanted to leave, and that he’s now been doing a career that didn’t even exist when he was young for nearly 20 years. He doesn’t plan to work on any more Valve projects for the forseeable future. In fact, he doesn’t have any concrete plans at all, beyond doing non-games stuff for a bit:

“That is unclear. I will almost certainly get back to writing more stories of my own; that’s simply my default setting. Working on games has been an amazing education, a vocation, an entire career I never expected to have. I found a calling that didn’t even exist when I was a sprout. But it feels like the time is right to return to my roots and see where that takes me. It might well take me back into games by other routes, but currently that’s not part of the plan. I’ll be exploring for a while.” 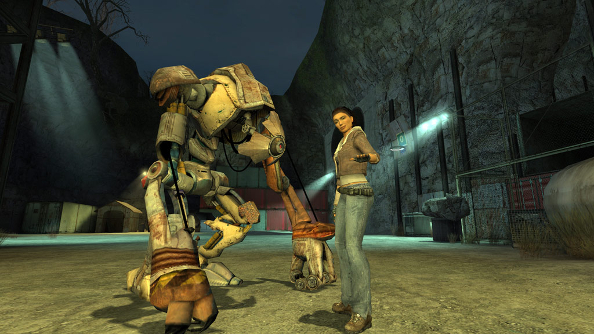 He also makes it clear that this e-mail is the extent of his comment on the matter, and he’ll keep replying with it to anyone who asks for a while until we all get the message. He doesn’t know what’s going to happen with Half-Life now, other than that it isn’t under his control because he doesn’t own it.

Assuming this is all real, it’s yet another nail in the rather well-filled coffin that is Half-Life 3’s possible existence. Every serious rumour and insider note we’ve ever received has pointed at it not existing in any serious form for a long time. With the series’ lead writer gone, even if it were to appear, it’s doubtable that it will now bare any resemblance to some sort of long-thought-out plan. Yes, maybe he’s finished the story and it’s sitting in a Valve vault, but if so it’s still going to be out of date by the time we get to read, watch and listen to it.

Good luck to him, of course. I’m sure many of us will be interested in whatever he does next, videogame or not. We’ll update if all this is confirmed, denied or otherwise from an official source. For what it’s worth, he is still listed on the official Valve employee page.