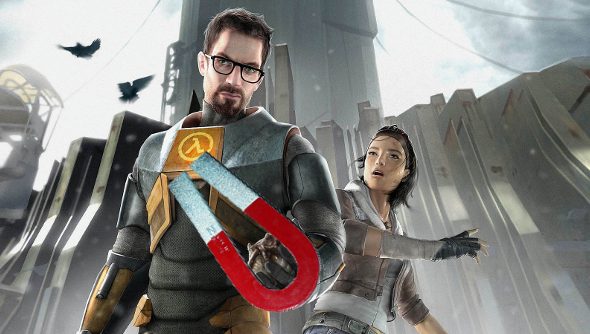 Warren Spector is doing a Reddit AMA right now, and it’s a lovely one, full of anecdotes, drinking stories and waxing nostalgic. He also hints at how the world might end: with Richard Garriott and Steve Jackson joining him to make a game, which would of course blow up the world in a cataclysm I’m personally okay with.

One thing that jumps out amid all the questions about Deus Ex and other past games is Spector’s response to a question about a Half-Life spin-off that never existed, which was going to be developed by Junction Point Studios before the company was acquired by Disney.

“I’m not sure how badly I’m going to get sued by someone for talking about this, but here goes,” Spector begins.

“Junction Point had a project cancelled (we can talk about that, too, if you want). There was no money. Basically, Valve came in like a white knight and offered us some work on a Half Life episode set in a part of the Half Life universe that hadn’t been explored deeply. In addition, just because my team couldn’t just do anything the easy way, we decided to add a new tool to the Half Life universe – the magnet gun. We came up with some COOL stuff to do with the magnet gun. Valve decided to move in another direction but I still wish they’d do something with the magnet gun. It was fun.”

So instead of Warren Spector’s take on the Half-Life universe… we got Epic Mickey.

Spector also chats away about Deus Ex, and where the series has gone since he stopped being involved. He has lots of lovely things to say about Human Revolution, but the recent Mankind Divided trailer has concerned him just a wee bit.

“I thought the Mankind Divided trailer was pretty violence-o-rific, which bugged me a little. I mean, the DX game was never about killing stuff. It was about picking your own playstyle, which MIGHT involve killing stuff. Given how well DX:HR did at the whole choice and consequence idea I’m hoping – and have confidence – the actual game will be a little more in the playstyle matters mold. In trailers, you just have to give people the most action-packed stuff you can, I assume. I’ll definitely be playing Mankind Divided. Ask me then.”

The AMA is still live, so go take a peek and throw some of your questions at him.