Half-Life 3 still seems like an impossible dream, but one that Naughty Dog’s Neil Druckmann would quite like to bring to life, a desire he expressed yesterday on Twitter.

Look, Valve, all I'm saying is you give us the Half Life license and we'll take care of the rest. 😉 https://t.co/XkrWjtfXyJ

Naughty Dog and the people around them keep accidentally confirming to the world that The Last of Us 2 is in development, and after yet another instance of this happening, creative director Neil Druckmann has deflected it in an interesting way: he’s asked Valve for the Half-Life 3 license.

This all came out of Merle Dandridge posting a picture of herself in mo-cap gear on Twitter. Dandridge starred in The Last of Us and was also Alyx Vance in Half-Life 2. A Naughty Dog-developed Half Life 3 is even harder to imagine than Valve finally making it, and while Druckmann’s just having a bit of fun, I find myself unable to not imagine what that game would look like. 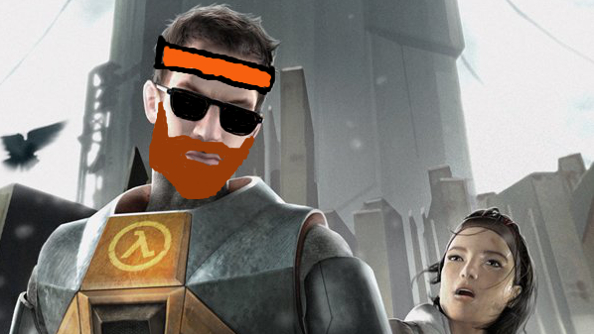 This isn’t your grandparents’ Half-Life. Forget everything you thought you knew about the Combine and mute physicist and saviour of the world, Gordon Freeman. After years of suffering in silence, the bespectacled hero has finally found his voice, and he’s got a lot to say.

What does he really think about science? It turns out that he only got into it to impress his dad, who is notoriously hard to impress. He’s sacrificed so much, including a promising career in a Styx cover band.

He’s let his beard grow out, he now wears a bandana, and he’s clearly been hitting the gym: this is a Gordon Freeman that bleeds cool. Can he pull off a badass leather jacket over his HEV suit? In Gordon Unleashed, we’re going to find out.