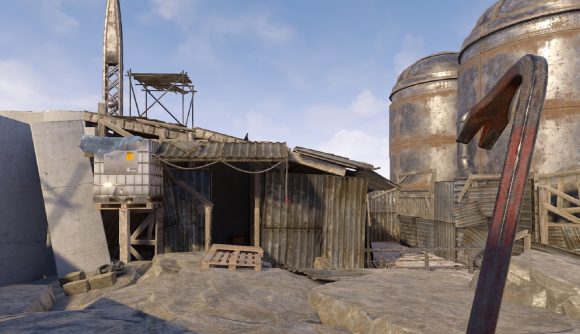 A Half-Life fan has decided he’s waited long enough for Valve to make Half-Life 3 and is making it himself. Why not, right? To be fair, Half-Life 2: Episode 2 did come out way back in 2007. That’s 12 years ago now, which makes it nearly a teenager at this point.

The fan who has ran out of patience and decided to make his own Half-Life 3 is Denys Almaral. As DSOGaming reports, he released a demo on April 21 that shows his progress so far, all of it made in Unreal Engine using only free assets that are available in the engine’s marketplace. He had to move the original download of the demo and put it on itch.io – where you can currently download it – due to the unexpected amount of attention it received.

There’s not a lot to the demo, admittedly, it being a single location set amid a mountainous area, with only a small outside area and a steel shack to explore. But you do at least get to hold a crowbar in your hand and jump around as much as you wish. What’s more Half-Life than that?

You can’t swing the crowbar, mind, which is a good job given that there are no enemies to kill. In fact, there isn’t even any sound. But you can make your own Gordon Freeman groans if that takes your fancy. Hey, it’s better than nothing.

What can be said for the Half-Life 3 demo is that the scene is well constructed. It even has a working sliding door! That may be due to Almaral’s day job being to create 3D models for TurboSquid – a company that creates and sells stock 3D models – which would explain why he’s done a decent job of putting it all together.

Related: Find out what happened to Half-Life 3

If you want to see what’s in the demo without having to download it you can watch the short video of it below. It shows off the entire area constructed so far.

Almaral says in the comments on the itch.io page that he’s not looking to get a team together for his Half-Life 3 project but says he has applied to work on Project Borealis – the much more substantial Half-Life 2: Episode 3 fan game currently in development. He hasn’t been accepted onto the Borealis team yet, but maybe his Half-Life 3 demo will get him closer to that.