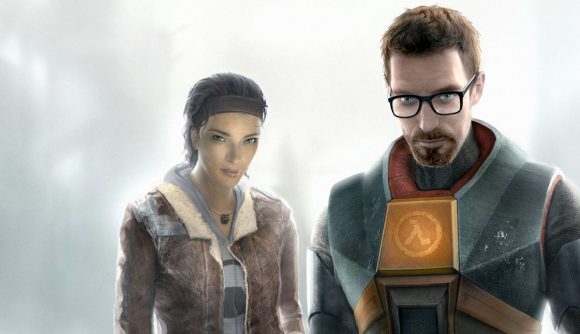 Half-Life: Alyx is real. After numerous rumours, Valve confirmed that its “flagship VR game” is a new take on the Half-Life universe, and will unveil further details Thursday, November 21 at 10:00 PST / 13:00 EST / 19:00 BST – not at the Game Awards, as the rumours initially suggested.

This Twitter announcement comes in the immediate aftermath of a transcript that appeared on Pastebin, which allegedly quotes an interview between Robin Walker (who had a development role in Half-Life 2, and co-developed Team Fortress 2), videogame journalist Geoff Keighley (whose Final Hours documentary series has looked at the development of Half-Life 2), and a third, unnamed participant. In it, Keighley is quoted as saying, “March 2020, ‘Half-Life: Alyx’ comin’ out.”

Asked about whether the game would be VR-only or available to those who haven’t got a headset, the unknown person says, “I mean we would love to be delivering a version of this that you could play with a mouse and a keyboard, but like, as we said, it began as an exploration of VR.”

Details on the game are sparse, but there is one indication of what gameplay could involve: “You can see their whole body – respond to the situation. You know, panicking, dropping clips on the ground as they fumble their weapons ’cause a zombie’s in front of them,” someone says, suggesting that they’ve seen some playtests of this.

It’s not clear where the leaked interview has come from, but it apparently comes from the same source behind a Dota Underlords leak. A new transcript of the content (via PC Gamer) indicates that Half-Life: Alyx will be at The Game Awards, which take place December 12, though it looks like we’re getting a reveal sooner than that.

In the meantime, check out what happened to Half-Life 3 and some ideas about which studios could make Half-Life 3 if Valve doesn’t.