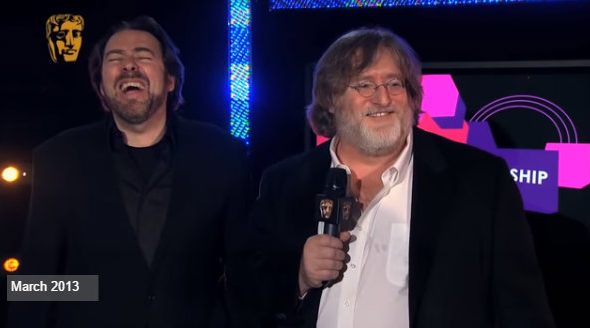 There was a time when Gabe Newell was fresh-faced, enjoyed speaking to the press and seemed genuinely enthusiastic about development on Half-Life 3. Someone has put together a video that shows this side of Newell, but it quickly moves onto the depressing truth: Half-Life 3 probably isn’t ever going to happen. Sad times.

I suppose we’ll just have to play through our best FPS list forever.

In a world where Doom and Wolfenstein reboots are actually excellent, I’m optimistic about Half-Life 3’s chances if it were ever released to a modern audience.

I think Valve could pull it off, despite expectations. Obviously time has moved on since the last game, but it was truly groundbreaking at the time. How much have shooters evolved since, really? Not much at all. There’s still room for Valve to step in and show everyone how to proceed in the FPS genre.

There was a two year period where Gabe Newell wouldn’t shut up about Half-Life 3 and it was glorious. Between August 2006 and August 2008 he was relentless.

“From our point of view, there’s enough newness in there that we want to spring it on people and say ‘here’s a bunch of things you’ve never seen before’, and have multiple of those,” Newell said to Geoff Keighley in a February 2008 interview. “There’s stuff that visually hasn’t been in games before and there’s certainly a bunch of game elements on the [level] or Portal that have never been done before.”

Fast forward six months and Newell now refuses to talk about the game to anyone, even Jonathan Ross – a habit he’s kept up until now, eight years later.

Have a watch of the video and make yourself cry below: