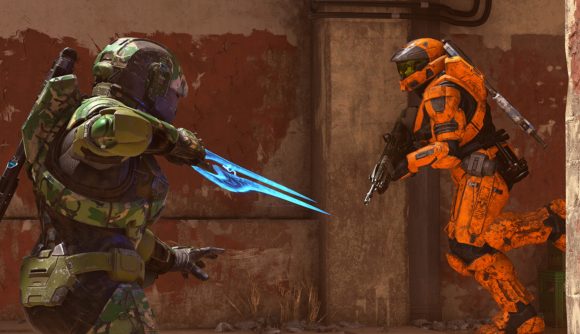 Streamers have begun to report that they’ve gotten invites to the Halo Infinite beta – or flight, to use Microsoft’s nomenclature – but the devs at 343 Industries have clarified that the multiplayer test has not yet gotten underway. We will know more very soon, though, as this month’s regular dev blog from the team will be all about flighting.

“Invites to a Halo Infinite technical preview have *not* been sent out,” community manager John Junyszek says on Twitter. “Again, you will know when and what is happening beforehand (via Inside Infinite)”. Junyszek also confirms that “this month’s Inside Infinite is about flighting”. These blogs typically go live on the last Thursday of the month, so expect the details on July 29.

So why have influencers been talking about the Halo Infinite flight today? 343 has been sending out emails to encourage registration, Junyszek says. “These emails were telling people to register for the Halo Insider program now so they wouldn’t have to feel rushed later. Even media/creators who want to play will need to register and set up their accounts correctly”.

You can sign up to the Halo Insider program to get into the upcoming flight for yourself on the official site.

Clarifying two topics!
1. This month's Inside Infinite is about flighting ✈️
2. Invites to a Halo Infinite technical preview have *not* been sent out. Again, you will know when and what is happening beforehand (via Inside Infinite) 📖

We still don’t have a final Halo Infinite release date, but the game is scheduled to launch in time for holiday 2021.