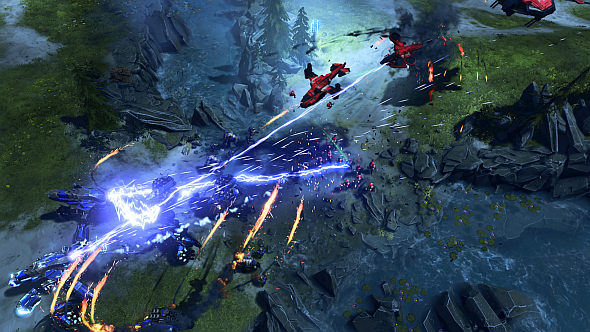 Update April 21, 2017: Halo Wars 2’s latest DLC leader has been delayed, though you probably realised that. Here’s why.

Halo Wars 2 was due to get a new army leader this week in a drop of DLC. Unfortunately, that hasn’t happened, with 343 Industries blaming a “game-breaking” bug. The DLC is “on track” to release next week instead.

Drop bombs – the deadly kind – in our list of the best strategy games on PC.

The news comes via Halo Waypoint. The forthcoming leader is named Colony, and is based on Halo’s Hunters (natively called Legkolo). Lore: they’re a species of alien worms who can link their bodies and brains together, commonly assuming a bipedal form when they do so. These walking colonies of worms (gross) are what Halo players know as Hunters.

Anyway. 343 say “we know everyone was looking forward to unleashing this new Lekgolo force upon their foes but it turns out there were a few lingering pesky bugs interspersed with those worms” (again, gross). “As much as we hate to let down players and fall through on a promise, holding the DLC to make sure these issues get addressed is the right, albeit painful, call to make.”

The most severe of those bugs enabled a new unit to continue firing on an enemy without regard to range or line of sight once it had first acquired that enemy. As 343 put it, “it’s a cheap exploit that would immediately result in some really bad game experiences”, so that’s why the DLC is beind held.

Colony is now due next week instead. Check out the announcement for more on the new units, achievements and Blitz cards coming your way.

Original story April 7, 2017:Halo Wars 2 has received a patch, and details of the game’s next DLC leader will be announced next week.

Halo studio 343 Industries made the announcements on Halo Waypoint, a weekly blog.

“We’ve got some pretty awesome new details about the game’s next DLC leader that should be emerging next week,” they say. This will be the second of many new multiplayer leaders, with the first,Lt Colonel Morgan Kinsano, arriving last month. She likes fire, and fiery units.

As for the patch, it’s mainly related to stability and bug-squashing, but the notes does say another patch will be applied “with the new leader launch later this month”, so we know the next leader will not only be announced but made available before the end of April.

The patch notes are copied in below. Nothing too exciting, but it’s good news if you hate stealth units: