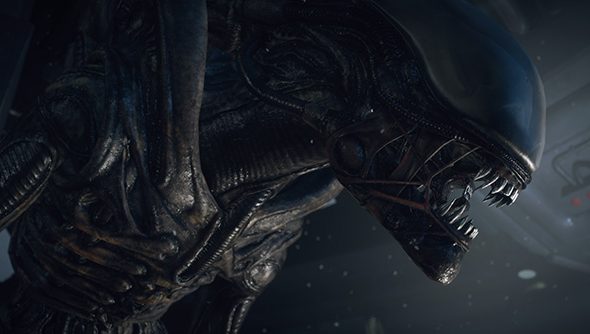 Hippity-hop, what have we got? Only a bona-fide, scary-as-balls Alien game guaranteed to spook your nuts off. Alien: Isolation has just been revealed by Sega following a sad slew of leaks, but here’s the deal: it’s only got one alien in, it plays sort of like Amnesia in space and it’s being developed by Creative Assembly, who are best known for their mostly exceptional games about history and spears rather than their first person horror adventure games. What a strange turn of events!

I have been playing it. Here’s what I think.

There was a moment when playing Alien: Isolation, in which I was peeking out from behind a desk on a spaceship, somewhere in space. It was very dark, except for a pulsing red emergency lamp and the last, flickering fluorescent bulb of a power-sapped lab farther down the corridor. And there was an alien, too. The alien, because there’s only one alien in Alien: Isolation, one towering, living, breathing alien who stalks and hunts you with uncanny animalistic intelligence and total patience. You don’t have a gun. 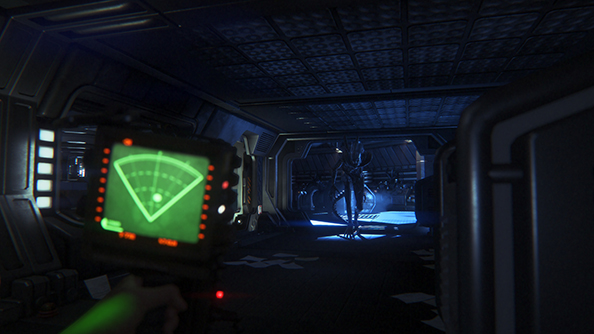 You peek around objects by holding a button and shifting your weight outwards or upwards from your hiding spot, which usually only gives you a glimpse of just part of the skulking creature, who sort of cranes his giant phallic head around as he walks, occasionally sniffing (or whatever) the air with his nose (or whatever). But it’s not clear if you’re immune to being spotted while peeking, so you very carefully inch your head sideways. You wait until you think it’s toddled off elsewhere and you crouch-walk to the next crate. Because only idiots walk upright in dark rooms.

When the alien screamed from some blindspot behind my peripheral vision, and I heard the rapid clattering of his chitinous paws come thundering towards me, I didn’t turn to face it. I didn’t even try to run. Instead I recoiled from the controls in primal gut-horror — I noped the eff out of there, as the internet would say — and left my character staring at the floor, paralysed for half a second until the furious xenomorph grabbed and eviscerated and mauled me back to the previous save point. I can confidently say that’s a reaction I’ve never had before. 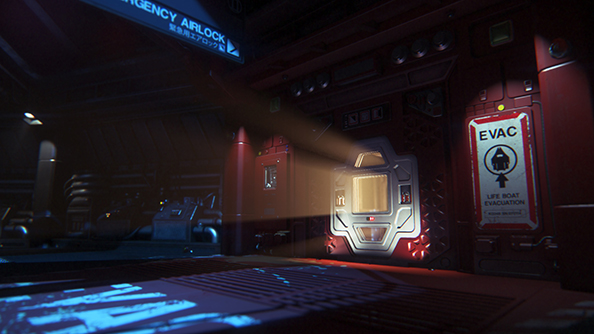 That might be because Alien: Isolation is a genuinely scary thing, perhaps the most frightening Alien game ever, as hyperbolic as that must sound. Or maybe it was because the demo room Creative Assembly had sat me down it was so dark, my headphones so loud and my seat so force-feedback enabled. Either way, the alien is an immediately convincing threat, one that straight away communicates his own lethality (this despite decades of appearing in other games as a pathetically splatterable cannon fodder foe) and readily demonstrates his own remarkable artificial intelligence.

In the demo the alien is triggered to descend from the ceiling with perfect dramatic timing, after which he sheds his scripted shackles and begins his stalking behaviour. From what’s been shown, the alien isn’t a persistent character on the ship, rather he’s called into action as and when the script dictates. Once he’s let loose however, he’s dynamically driven by a number of senses as he patrols corridors in search of you. He’ll react to your movements and any sounds you make. He can spot your torchlight and attempt to ascertain your location from it. Multiple deaths and repeated playthroughs of one area of the game demonstrated the alien’s radically different behaviours: not only do his routes change, but so do his reactions. Creative Assembly point to a complex flow-chart of the alien’s behaviours, a system that dictates his mood and instructs him on what to do next given the circumstances. 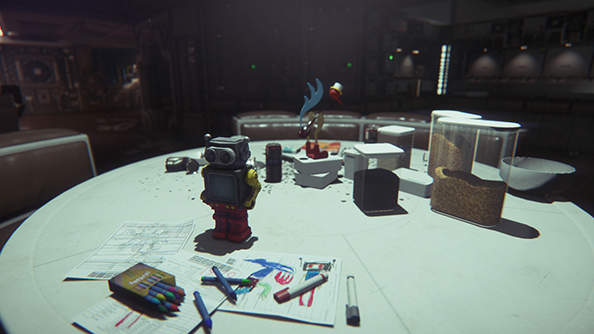 Three times I sprinted for cover inside a locker. Each time, the sound of my movement drew the alien out of the adjacent room to investigate, but each time he responded differently. He would skulk past my hiding spot, his nine-foot tall black mass just barely visible through the locker’s grille. You can press your face up to the slats for a risky gander, or push backwards, deeper into the locker to hold your breath and wait for him to pass. The first time I attempted this he paused outside my locker and then, just as it seemed he was losing interest, burst through the door and rippled my guts all to shreds. The second time he mistakenly tore into the adjacent locker like a big idiot. The third time he simply got bored, did whatever the alien equivalent of shrugging is and wandered off.

The music shifts dynamically as these scenarios manifest themselves, going from thematic, extended scores during moments of relative calm to the hauntingly shrill and nerve-shredding violin screech that pervades the original Alien soundtrack. As well as being utterly spooky, Alien: Isolation is also unrelentingly faithful to the look and feel of the 1979 classic, drawing on three terabytes of archive data from Fox, encompassing original audio, blueprints, photography and design work.

In creating the Sevastopol, the abandoned trading station on which Alien: Isolation takes place, Creative Assembly used only designs that could have been built on a 1979 film set: there are CRT monitors instead of flatscreens, clunky push-buttons instead of touch interfaces and paper notes and polaroids instead of datapads and holograms. The architecture of the game’s corridors is rooted in artist Ron Cobb’s original design work, as are the signs, posters and decals scattered about the game world. Any video seen playing on screens has been run through a damaged VHS recorder to recreate the analogue grittiness of the time. They even recorded these visuals over VHS cassettes of the original Alien film, so that any video artefacts or hints of frames that leaked through would be drawn from the very universe they’re expanding on.

It’s nerdy as hell, and the sort of attention to detail that pretty much every developer of an Alien game has at one point claimed to give a damn about, but Creative Assembly can repeatedly point to practical, in-game applications of their exhaustive research. The Sevastopol looks and feels like it’s been lifted right out of Ridley Scott’s mind and dragged through the same art and design processes that built the Nostromo itself. The same can be said for the costume design: though there were no humans in the demo, the development team later proudly displayed a team of individually dressed and visually unique NPCs, dozens and dozens of them, many of them members of Creative Assembly who’d volunteered for facial-scanning and subsequently been gifted amazing 70s hairdos. 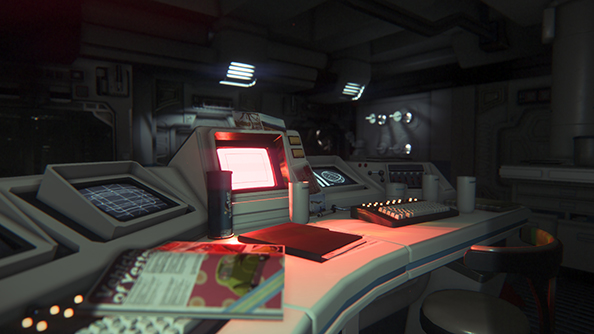 That focus on creating a cast of believable and distinct human (and, you might guess, android) characters suggests that Alien: Isolation won’t be as lonely an experience as the title suggests. The team is only ready to reveal this tiny experiential wedge of the full game right now, but say that the level of tension felt when being hunted by the xenomorph won’t be sustained throughout the entire campaign. This isn’t a shooter, they repeatedly insist, it’s a first person horror adventure. I did notice, however, a reload button, and it’s unlikely that the alien will be the only enemy you encounter.

You could read into the plot and premise to speculate on who else might be wanting you dead in Alien: Isolation. You play as Amanda Ripley, Weyland-Yutani employee and Ellen Ripley’s wee bairn, who, fifteen years after the disappearance of her mother gets word of the discovery of the black box of the Nostromo, which has somehow found its way aboard the trading station Sevastopol. 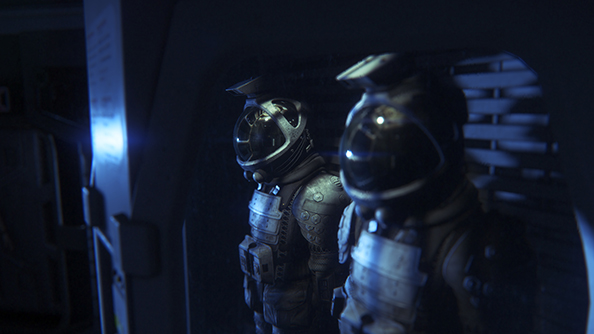 “I’m off to discover the secrets of my dead mum,” Amanda probably shouts as she blasts off into space to check things out, only to find the station seemingly evacuated and apparently haunted by a bad-ass alien with all the aforementioned bad-ass artificial intelligence. At least one mysterious corporation, Seegson, operates out of the Sevastopol. For my money Seegson is probably, definitely “up to something”. However it pans out, it’s a neat bit of canonical nip-tucking that lays Alien: Isolation’s story right on the doorstep of the original film, and delivers a playable character that naturally draws on one of the most loved sci-fi heroes of all time. That it doesn’t appear to involve a single Colonial Marine either is also a bonus.

Alien: Isolation unpussifies one of the most cruelly declawed monsters in cinema and embraces the challenge of creating a non-combative yet still impactful experience inside a faithfully recreated and beautifully rendered universe. That they chose to lead the reveal with a section of the game in which you’re utterly helpless against an impossibly powerful and frightening enemy speaks volumes about where Creative Assembly are focusing their efforts too, as well as about the degree of confidence they have in their project.

How that harrowing and emotionally intense segment of game fits into the greater arc of Alien: Isolation will be important of course, as will how the game plays when the star of the show isn’t around. But what’s been revealed so far is a startlingly strong baseline and an absolutely surprising show from an unlikely studio.