As a Viking loomed out of the mist with a two-handed great axe raised high above his head and crushed my Saxon warrior’s skull with a massive blow, it occurred to me that War of the Vikings is really medieval combat’s Counter-Strike.

It wasn’t just the fact that my team was getting eviscerated inside of two minutes for the third round in a row, though that’s a familiar feeling from my time in Counter-Strike. It was the way War of the Vikings could be so simple and easy to understand, and yet demonically difficult at which to excel.

War of the Vikings is Paradox’s followup to the coolly received War of the Roses. It sets the action back in time a few hundred years, during the height of the Viking raids against Saxon Britain. Once again, familiar competitive shooter game modes are recast in a medieval mold. There’s a competitive, no-respawns team deathmatch and the familiar control-point tug-of-war domination mode.

Except this time it all just seems to work better. The controls are responsive and intuitive, and I didn’t find myself making unflattering comparisons with Mount and Blade like when I first played War of the Roses. Directional attacks and parries were efficiently taught in a mercifully brief tutorial, and bows strike a nice balance between realism and playability.

Every weapon and technique is simple, but applying them correctly in battle is the real challenge. Archers have to land their shots during split-second windows of opportunity as their targets wheel around in a melee, or duck through cover. It’s easy to make your sword swing forehanded or backhanded, but go ahead and try to find your target in combat as someone runs past you, and you’re already starting to turn and parry someone else’s blow from the side.

It feels incredible when it all goes right. My finest moment during our sixteen-player LAN session at Paradox Con came when I single-handedly defended a control point. I don’t know how long I lasted, because I didn’t even realize I was alone until the fight was nearly done. But somehow I took on three guys at once, cut two of them down with one mighty forehand swing, then spitted the other on the end of my sword. I felt like a barbarian hero for a moment, a single glorious moment …that was cut short as I was pincushioned by an archer. 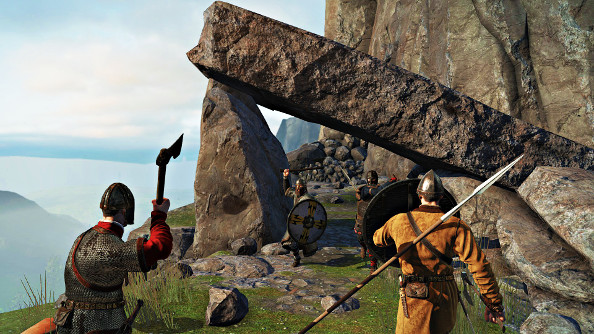 That’s when it goes right, but part of what makes War of the Vikings so entertaining is that things rarely go all that right. I whiffed horribly on most of my power attacks, could not parry without a shield to save my life, and frequently had to shift my aim at the last second because I realized the back I was about to stab belonged to a friendly. When you’re in a crush of Saxon and Viking bodies, you realize why this feels so much more chaotic and dangerous than a team shooter. Dorothy Sayers summed it perfectly when she wrote, “”A bullet, you see, may go anywhere, but steel’s almost bound to go somewhere.”

War of the Vikings feels more thematically appropriate than its predecessor. The Wars of the Roses were a military conflict of sufficient scale to make a deathmatch-focused action game feel a bit silly. I always felt like I was LARPing the battles between Lancaster and York rather than participating in anything related to the actual event.

But the Vikings’ and Saxons’ conflicts are not nearly so well-documented, and it’s easier to imagine them being like these squalid, desperate fights between small bands of warriors.

The sound and art work beautifully to bring all this to life. A blade thuds off a shield and a second later there is a dull, meaty thump as the riposte strikes home. A perfect thrust leaves steel ringing as its victim tumbles into the soft dirt. Sometimes War of the Vikings raises the din of battle, with gutteral cries in Old English and Icelandic being traded between teams over a backdrop of metal-on-metal. But most of the time it’s surprisingly muted as fighters trade ineffective blows and then back off, gasping from the effort and trying to find their next opening. 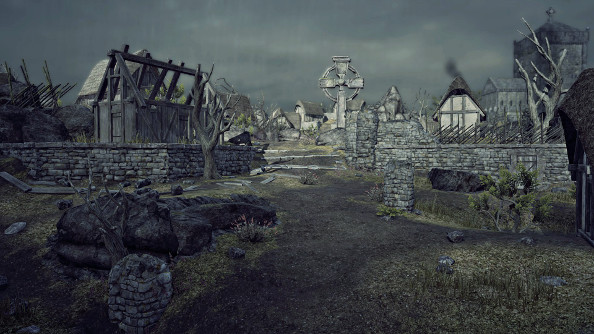 The art enhances this eeriness. War of the Vikings takes place on the edge of civilization, in grimy villages and on subsistence-level farms, or amidst old Roman or druidic ruins that are slowly being reclaimed by the wild. A light fog in a coastal village turns both sides into menacing phantoms, while a late afternoon sun breaking through a sparse forest gives worn metal helms and axes a cold, dull gleam.

It made me appreciate the importance of one of War of the Vikings’ most prominent features: customized armor and shields. Usually, this kind of thing strikes me as rather silly. In a military shooter, I don’t really care if my gun has a skin or if my soldier has some special camo unless it confers an actual benefit. But in War of the Vikings’ grimy and confusing combat, those outfits and especially those shields start to become, well, heraldry. They proclaim your identity and become a calling card, the last thing someone saw before getting it in the neck. The person who has killed you three times during a long control-point match stops being some random Viking player, and becomes that asshole with the three ravens on his shield.

And when you kill that person with a well-deserved and well-aimed strike, you can take that shield and use it as a trophy and a bait. Here, you recognize this? You want it back? Come get it. So a grudge is born.

I immensely enjoyed the hour I spent with War of the Vikings, but what I’m not sure about is for how many more hours I would keep coming back. The controls are good enough, but the mouse movements for direction attacking and parrying never quite felt at ease alongside the basic movement controls. The tendency to begin circle-strafing and flailing was almost irresistible.

The Counter-Strike comparison also reminds me that what made CS special was that it was not just a deathmatch. Even if most bomb-defusal matches ended with one team being wiped out, it was the existence of that primary objective that gave those games their structure and made them more than just an exercise in twitchiness. War of the Vikings doesn’t seem to have that outside of the domination mode, and that little bit of structure could help turn games from fun but shallow melees into exciting competitive battles.