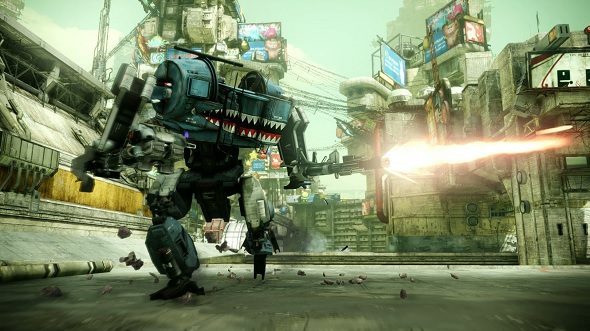 On January 8, 2018, free-to-play mech shooter Hawken will no longer be available to play on PC. The supposed relaunch, announced back in February, appears not to have paid off, so the developers are pulling the plug. With so few great mech games around, this is a huge loss – even on its deathbed, Hawken remains one of the strongest mech-‘em-ups on PC. I have tried finding the same flavour of mech action elsewhere, but from the sluggish, impenetrable systems of MechWarrior Online, to the lane-locked metal soldiers of Titanfall, nothing has come close to Hawken’s particular style of robot-on-robot action.

Hawken isn’t the only mech game in trouble – read our story on the legal battle that BattleTech and MechWarrior have been through.

Hawken is an ideal blend of frenetic shooting and stompy war machines, with mechs feeling closer to destruction derby cars than the lumbering giants of BattleTech. There is a satisfying physicality to the controls – cockpits lurch with every dash, shaking with weapon fire. Even the heavier classes have a real kick to their speed, but the satisfaction for me is always zipping around in a light Berserker, chipping away at flanks before making a quick getaway. Over time, the developers toyed with the damage and armour numbers so that the time-to-kill decreased, upping the stakes of each steely showdown. Daring attack runs are all the more exciting when a well-placed rocket is the only thing that stands between escape and a flaming wreck. 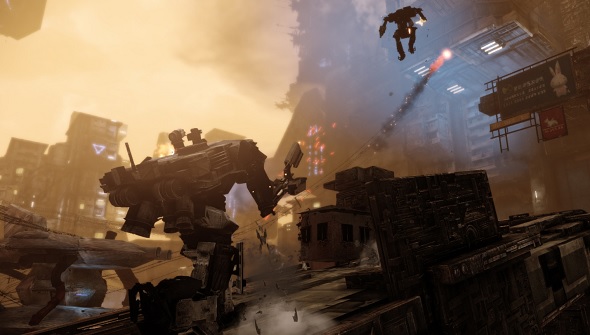 While Hawken has the usual deathmatch and point-control game modes, where everything really comes together is in its fantastic siege matches. Two teams fight for control of energy units, which fuel airships that traverse the map and fire at the other team’s HQ. Fast mechs dash across the stage gathering energy while heavies chip away at each other, holding down the pivotal Anti-Air turret. Where in most modes fights can come down to ‘which side brought the most guns’, there is a real need for coordination in siege. Sadly, over the last few years, the player count has been too low for anything other than deathmatch, so later players missed out on the thrill of a full round of siege.

Hawken’s biggest strength is its sense of style. A grimy, blue-collar world of corporate competition and scavenging mercenaries, brought to life through killer art direction and a quietly brilliant soundtrack. This setting inspired maps ranging from lush jungles and blistering deserts, through urban locales that ran the gamut from dense highways to polluted industrial complexes. 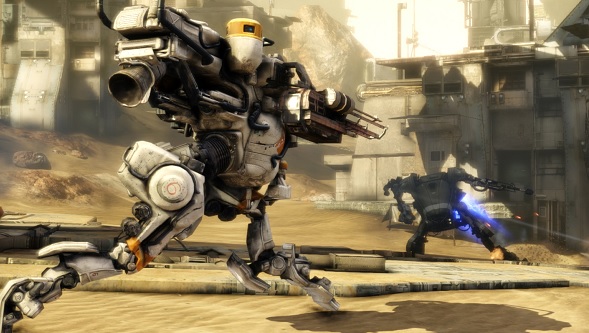 But the real star is the mech design – these janky, heavyset robots all look like something cobbled together on Scrapheap Challenge. Of note is the notorious ‘Fred’ starter mech – essentially an oversized CRT screen on legs, it even comes with a skin that plasters a Windows blue screen over its cockpit. Most designs continue this theme of looking like a box of industrial appliances haphazardly welded together, draped with tarps, and sporting parts of other vehicles thrown on for good measure. Even the ones that manage to look cool sport the same home-made charm.

I will be sad when Hawken dies. It has its problems – like a lot of free-to-play games from around that time, the grind is outrageous, and a string of development issues kept much of the planned content from surfacing over its five years in Early Access. No game since has quite captured the look and feel of mech combat like Hawken does – and with the game’s failure to ever really get off the ground, it is unlikely we will see its particular style emulated any time soon. Mech fans on PC may have forthcoming titles in the BattleTech and MechWarrior line-up to look forward to, but Hawken’s sunset is a real loss to such an underserved genre.