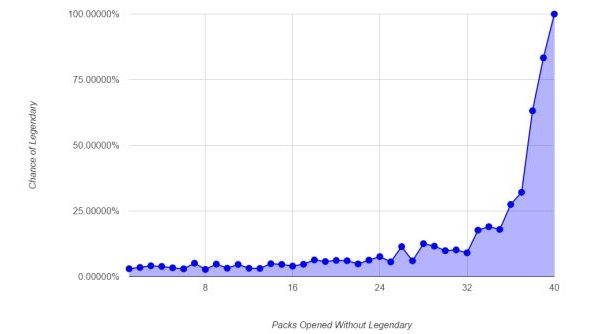 When you open a pack of Hearthstone cards, you have various percentage chances to get specific rarities of cards. Each pack will always contain one rare or better, and then there’s various possibilities of golden variants, additional epics and legendaries. It might be naturally assumed that this is static – that there is always about a 3% chance a Hearthstone pack will contain a legendary. This is not the case.

Now you know how to get the cards, here’s the best Hearthstone decks to build.

The data has come to light over the past couple of days when information from an old experiment was posted by Reddit poster briel_hsand used, along with some other data, to concoct a theory that it is impossible to open 40 packs of Hearthstone cards from the same set in a row without opening a legendary. This has been corroborated by countless incidental sources as being true at least from the release of The Grand Tournament in the middle of last year.

He nicknamed it a Pity Timer, referring to the game slowly taking pity on you for being unlucky before eventually giving you a 100% chance of opening a legendary on the 40th pack. This is consistent even if you logout or exit the pack-opening screen, but doesn’t work across sets. 20 packs of GvG followed by 20 packs of Classic, neither opening a legendary card, will not result in a 100% chance, but will push each to the 20-opened chance of roughly 6% – double the norm. The next time you open a pack of either sort, that will still be your chance, no matter how long it has been or what you’ve done inbetween.

A similar system is used in a lot of games, especially Blizzard’s own World of Warcraft and Diablo 3. Elsewhere, pseudo-random chance of this sort, where the more it doesn’t happen the more likely it gets, has been a mainstay of competitive games with random elements for a while. Dota’s various on-hit percentage-chance effectswill happen after a certain number of blows, no matter how unlucky you are.

Another poster Pi143did wizardry on the actual Hearthstone numbers, giving us this lovely graph. 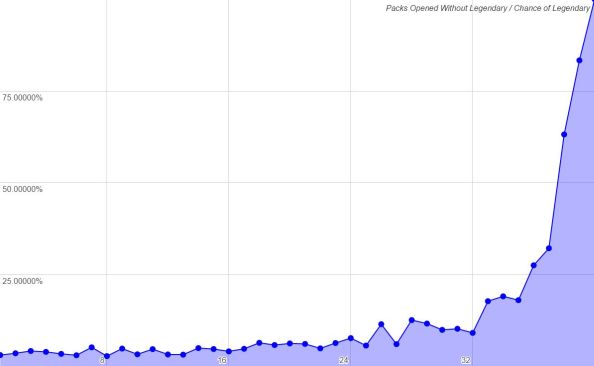 In it you can see the chance stays quite low for the first 20 packs or so before starting to spike rapidly. The same is also true for receiving epics, which should happen once per ten packs at the maximum, with a significant increased chance coming after around pack five. Pi143 also says it’s true of Golden cards, but hasn’t posted the full data. It works out at about one per 25 for golden commons, one per 30 for golden rares.

So – what does this all mean for the average player? Well, basically nothing, it’s only good for you. Your chance of getting a legendary never drops below the 3% and change that it has always been assumed at. If you’re ever feeling desperately unlucky, it probably means a legendary, or at least a decent epic pack, is just around the corner. However, it does put some strategy into pack opening. You should always open the same set until you receive a legendary, and then move on to a set where your most recent pack wasn’t legendarified. Eventually you’re reset them all to 0 and you can freely pick one – but then shouldn’t switch until you open a legendary again.

From Blizzard’s perspective, it’s just a sound decision. They don’t want players getting the feel-bads from buying one of their fifty pack bundles and not getting a single legendary. Assuming all the math and other evidence here is correct, I’m a little surprised they’ve never made it clear in the past, particularly when doing their pre-order deals. “Buy this, get at least one legendary” has a pulling power to it. Even so, we’ve asked them for comment, and will update our story if they reply.

I’d definitely recommend checking out the two Reddit posts linked above, as they contain more information on where this data came from and how the math was done. In the mean time, get back to cracking packs, only in an orderly fashion.