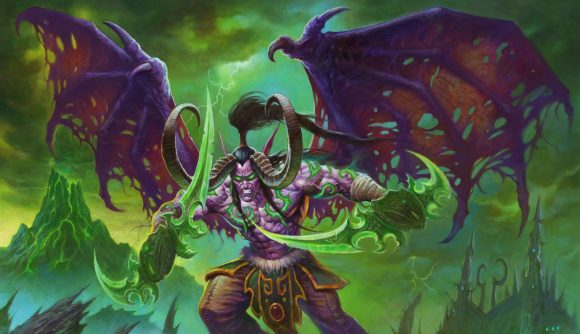 Hearthstone, the collectable card game from Blizzard Entertainment, is finally getting a new class – Demon Hunter. After years of players going from Hunter to Shaman metas and beyond, there will now be a new class added to the roster.

Demon Hunter will be represented by Illidan Stormrage, a character very familiar to the fans of World of Warcraft, and unsurprisingly, his playstyle is going to be as aggressive as it gets, bringing in legions of beefy demons to fight the good (read: bad) fight. He’s a particularly curious new character when you consider that Malfurion, Illidan’s twin, is already in the game. Perhaps some unusual things will happen when they’re both on the board.

The Demon Hunter’s hero power is ‘Demon Claws’ which for one mana grants your hero plus one attack, aiding the threatening playstyle. Demon Hunter will also get a new special keyword ‘Outcast’ which only activates when a card is furthest left or right in your hand.

Demon Hunter will also have a prologue adventure to get players familiar with the character and his story, and stock up on cards to use. Every other class in Hearthstone has a backlog of cards already at their disposal, so bringing in a new class means the Blizzard team is using an adventure focussed on Illidan to bring him up to speed.

The Demon Hunter prologue content will come to Hearthstone on April 2, and playing through it unlocks the class, 30 cards, and a starting deck for Demon Hunter. Once the class is unlocked, players get their hands on the Demon Hunter in-game on April 7.

Read ’em and weep: The best Hearthstone decks for beginners

Those are just the quick factors about Hearthstone’s new class, but there is so much more coming to the card game with the new expansion, not to mention the game is getting cheaper to maintain too.