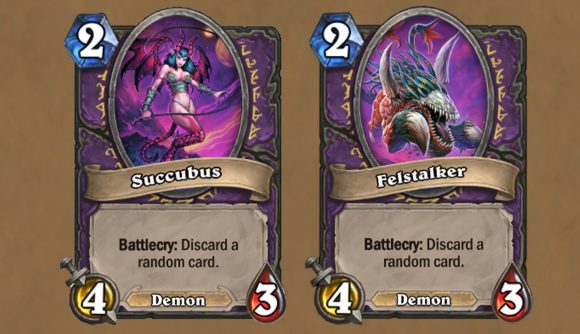 Hearthstone’s next big expansion launches next month, but a new patch has set the stage for Saviors of Uldum ahead of time. While the July 1 patch features the usual shuffling of cards around the Hall of Fame and Classic sets, players have been more concerned about what appears to be censorship.

Eight Hearthstone cards have received new pieces of art in the update. Bite, which originally showed an animal with bloody jaws biting into the shoulder of another creature, now shows the animal simply snarling. Deadly Shot previously had an arrow piercing the chest of a figure in armour – now it’s simply an arrow in flight.

Art featuring female characters in sexually provocative poses has similarly been altered. Secretkeeper and Windfury Harpy have new art in more neutral poses, though they’re both still in revealing costumes. Mistress of Pain has received new art and been renamed to the mildly less BDSM-flavoured title of Queen of Pain.

The most extreme example of the changes is Succubus. It’s been replaced with Felstalker, a card with identical effects that swaps out the lustful demon for a less humanoid demonic monster.

In a statement to Kotaku, a Blizzard spokesperson says “The recent changes were applied to make those cards more visually cohesive and consistent with the art style of Hearthstone today.” Much of the original Hearthstone artwork comes from the World of Warcraft TCG, and Blizzard says these changes are to bring the old art in line with the modern style.

Many players have speculated that Chinese content regulations are behind the differences, and those regulations have at times affected art decisions worldwide – as was the case when Rainbow Six Siege’s “aesthetic changes” nearly went out to every version of the game. However, Blizzard says that’s not the case here.

“We went back and really just brought everything up to our standards,” lead mission designer Dave Kosak tells PC Gamer. “It wasn’t because we were looking at ratings, or international [regulations], or anything like that. We really just wanted our artists to feel good about everything in the set.”

Read more: Deal yourself into the best card games on PC

You can see all the new cards on the official site. A few months ago, a similar Reddit uproar appeared when Jaina Proudmoore got an undershirt covering her cleavage, so it seems Blizzard is continuing to make these sorts of art changes – regardless of the reasons why.