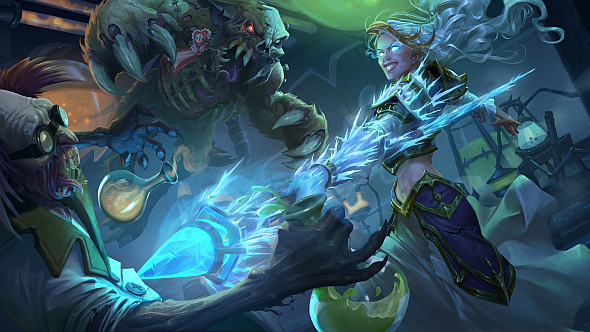 Update, October 17: The Hallow’s End update has brought the promised changes to Arena mode, removing synergy picks from the lineup.

The latest Hearthstone update is here, setting the stage for Hallow’s End alongside a host of other updates and balance changes. Most notably, Blizzard are walking back the changes that saw Arena players getting ‘synergy’ cards at the top of a match, returning to a truly random format as they announced last month.

The Arena is the equaliser. Beyond, you’ll need a good deck – our guide may help.

Arena sees a couple of other changes, as well, with Vicious Fledgling no longer draftable and a few non-specific smaller adjustments to appearance rates hitting other cards.

A pair of new card backs are available for hitting level 20 in ranked play in October and November respectively, and that new warlock skin you’ve got to attend a Fireside Gathering for is also live. Blizzard generally seem intent on pushing those gatherings, as they now have their own menu option.

You can see the most pertinent gameplay changes below. For full patch notes including bug fixes, have a look at Blizzard’s official announcement.

Original Story, September 10:Hearthstone is an unpredictable and chaotic game at the best of times, but the great equaliser has always been its Arena mode.

Upon entering, the Arena has you build an improvised deck, picking one card from three random picks until a full set of 30 is assembled. Blizzard courted controversy in their latest expansion by limiting your first two picks to a much narrower band of potentially deck-defining ‘synergy’ cards, a move which has been broadly criticised by players.

It seems the response has been negative enough for Blizzard to fold, and announce thatthe Arena is returning to its randomised rootsin the next major patch.

The fundamental critique of the synergy system was that it forced you into far more narrow deck-building choices. Having taken a card early on that only becomes more powerful with other similar minions in play, you have the unenviable choice of doubling down constantly on that choice and seeking out similar matches in your other picks, or considering your synergy draw a loss. It was as much a psychological limitation as numerical, but that’s half the spirit of card games to begin with.

In a game as community-driven as Hearthstone, it’s good to see developers with their ear to the ground. Blizzard had previously mentioned that they were collecting feedback regarding the synergy situation, although they were previously unwilling to say whether a complete removal of the system was on the cards.

With the chips down, it seems they went with the safe bet and the game is returning to its naturally chaotic state. Hearthstone is a living game, continually evolving, and looking to the future, hence Blizzard have stated that there are more planned shakeups likely coming to the Arena side of the game,including general format shifts, although they don’t think that it’ll be returning to the more chaotic Wild mode – even the arena needs a few restrictions.