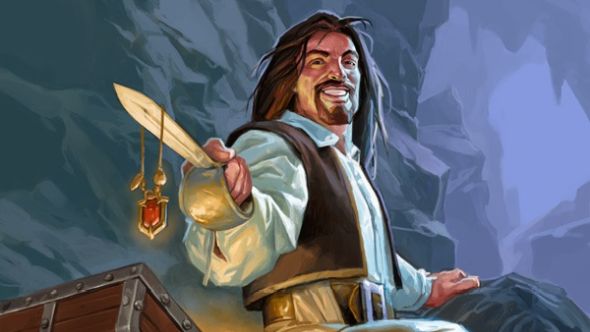 Blizzard are rewarding Hearthstone players with a legendary card just for booting up the game. Marin the Fox will be available from now until the release of the new Kobolds & Catacombs expansion next month, and possibly beyond.

Here are the best Hearthstone decks for beginners.

Marin is a soulbound card, which means it can’t be crafted or disenchanted. It’s an eight mana 6/6, equipped with a Battlecry that summons a 0/8 Treasure Chest on your opponent’s side of the board. If you destroy the chest, it’ll give you some loot, one of four unique three mana cards. Tolin’s goblet lets you draw a card, filling your hand with copies of it; Wondrous Wand draws three cards and reduces their cost to zero; Zarong’s Crown lets you discover another legendary card and then summon two copies of it; and Golden Kobold is a 6/6 Taunt, which replaces your entire hand with legendary minions.

You can watch some Marin gameplay above – he’s drawn at around the six-minute mark, and while the video isn’t exactly top-level play, it shows off how the new card works.

Logging into Hearthstone from yesterday will have earned you Marin, and if you went to BlizzCon, you’ll get access to a golden version of the card (virtual tickets also count). There’s no set end-date for Marin’s availability, but he will be available “at least for now through the Hearthstone Kobolds & Catacombs expansion slated to release in December,” according to a Blizzard spokesperson.