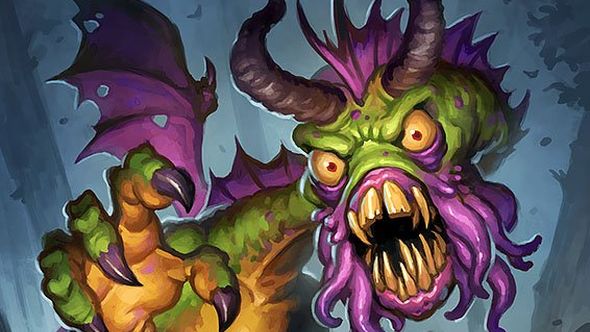 Shudderwock, the Hearthstone card described by former game director Ben Brode as “the craziest we’ve ever made,” is getting fixed. A post on the Hearthstone forum confirmed the change will arrive “in a future update.”

Here are the best Hearthstone decks for beginners.

Shudderwock is a cornerstone card of an irritating combo which, if you’re on the receiving end, is simply no fun at all to play against. That’s not because it’s insanely strong – Shudderwock Shaman is particularly weak against aggro decks – but because it takes so damn long. By the time you’ve chained it Battlecry (“repeat all Battlecries you’ve played this game”) with a few key cards, the relevant animations can run for several minutes.

So while Blizzard’s fix isn’t focused directly at balance, it should fix some of the card’s more annoying traits. In the post, community manager Jesse Hill says that Blizzard “will be doubling the animation speed of Shudderwock’s Battlecry so it will lessen the impact on the overall pacing of your current Hearthstone match. In addition, the amount of Battlecries Shudderwock can reproduce will be capped at 20.” In a similar vein, Blizzard are also speeding up the animation on Lifedrinker, which is a key part of Shudderwock decks.

It won’t have fixed the card, or really have had too big an impact on the deck it’s being played in – clearly Blizzard aren’t too worried about the card’s individual strengths. It should, however, prevent each turn it’s involved in from taking several minutes to play.