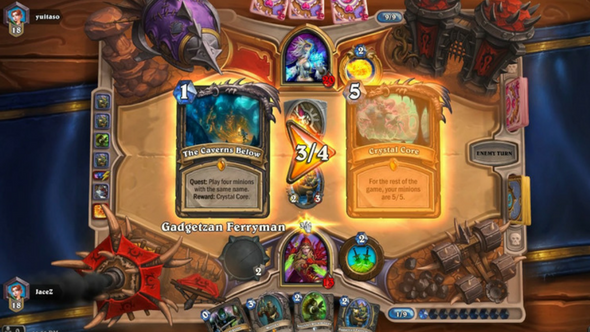 The Rogue is getting a bit of a nerf in Hearthstone as announced in the forums today. The change concerns the “Caverns Below” card, which requires you to send out four copies of the same type of card. Upon completion of the Caverns Below quest all minions become 5/5 monsters which makes it incredibly easy to spawn a powerful stable of creatures.

f you’re new to Hearthstone, give these beginner decks a try.

However, there have been complaints that the Caverns Below card makes the Rogue too overpowered, so now instead of four cards to complete its requirements, you have to send out five. Blizzard stated this was to prevent slower, control-oriented decks from becoming irrelevant. The change should keep a wider range of decks valid instead of everyone just playing as the Rogue.

The Caverns Below balance change is just part of a large effort to rebalance Hearthstone. You should see the new update rollout in the next couple of days as the new season of competitive play begins.