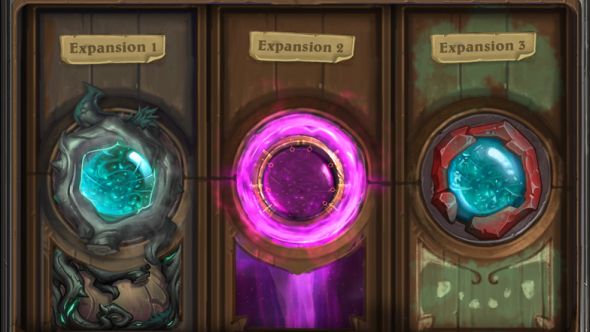 Update, February 28: Hearthstone players may have figured out the theme of some of the Year of the Raven expansions.

Hearthstone players have been hard at work figuring out what’s in store for the upcoming Year of the Raven. Given that they’ve had all of 20 whole hours to analyse the small teaser offered in yesterday’s announcement, it’s unsurprising that the community already has a pretty good idea of what’s to come.

This Reddit thread seems to offer the most cohesive answers so far, and straight off the bat one player seems to have uncovered what will be behind the second expansion. According to captain_dark, expansion two will focus on the Ethereals, as the magic purple circle matches up almost perfectly with the portals that the faction uses to travel between worlds. That likely means the ability to spawn in extra minions, assuming you can set up (and keep alive) one of these portals.

Expansions one and three are still a bit uncertain, but a different player, Kaellian, has some theories. They reckon that expansion one will potentially focus on the Moonglade, and will probably tie in to the arrival of new Druid hero Lunara to the game. Expansion three is more difficult to guess at, but Kaellian seems to think that the war paint, as well as the tusks at the bottom of the teaser could point to a Troll-themed expansion.

Original story, February 27:The Year of the Raven, the next year of content coming to Hearthstone, will contain three brand new expansions. Blizzard didn’t say exactly what any of the new expansions would include, but they did tease all three of them, as you can see in the image above.

At this point we can only guess what that teaser is actually showing. Discussions around expansion one’s image in the PCGN office suggest it might be something to do with the Old Gods again, but my opinion is that those are thorns, not tentacles, which could point towards a Druid-themed expansion. We’re pretty set on expansion two being based on The Void, given the purple glow around that Magic Circle, but we have no idea what expansion three is – guesses range from Murlocs and Pirates to Shamans and Goblins.

The community has been dissecting the teaser, too, and, given the wisdom of the masses, they’re likely to have the best ideas. Lots of people think the first expansion will have something to do with the Emerald Dream, and given we know Lunara is coming to the game for the Druid class, that fits quite well. For the second expansion, the community think it’s something to do with Ethereals, creatures from the Twisting Nether, and for the third expansion; nobody knows. Trolls are the most commonly suggested answer, but that’s solely based on the fact that it was paint that’s somewhat similar to the colours trolls use.

Blizzard also say they’re committed to new single-player missions for each of the new campaigns. It’s difficult to say what these will be until we know more about the expansions themselves, but it’s safe to assume we’ll get a decent range of new content – there’ll likely be a mixture of story-based modes like the one in The Frozen Throne expansion, but also other modes, likeDungeon Run.

Three new expansions mean three old expansions are being rotated out of play. One Night at Karazhan, Means Streets of Gadgetzan, and Whispers of the Old Gods are all heading to Wild. They’ll be accompanied by Molten Giant, Ice Block, and Coldlight Oracle, which are heading to the Hall of Fame.

We don’t have an exact release date for any of the expansions, but expect one in April (with the start of Year of the Raven), another in August, and the final one in December.