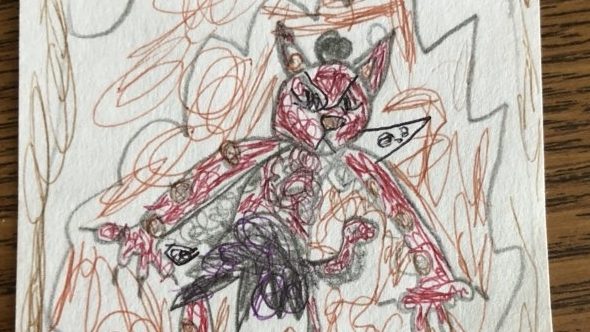 Blizzard may have a top team of designers working on new Hearthstone cards but nothing compares to the imagination of a child.

Check out our list of the best Hearthstone decks for beginners.

Twitter user John Tucci tweeted a picture to Blizzard of a Hearthstone card his nine-year-old daughter drew. The crayon-drawn card depicts the Leoparden, a cave-dwelling cat-like creature made of fur.

Behold the LEOPARDEN! He lives in the caves and eats Kobolds! She said his voice when played is “you Kobolds are DELICIOUS” and his clothes are Kobold fur. #Hearthstone pic.twitter.com/pUM0omVE4A

This inspired professional illustrator Kate Holden to create a mock-up of what the drawing would look like as an official Hearthstone card. The answer – pretty cool. Even Hearthstone director, Ben Brode, thought so.

I can’t even imagine the mana cost of this 100/100 card. I couldn’t resist painting a mockup though pic.twitter.com/qDmx6e8Ehr

The Leoparden is pretty over-powered, with 100/100, and is equally as vicious as it looks in the original concept art.

We look forward to seeing a Leoparden Hearthstone card in the future (hopefully).