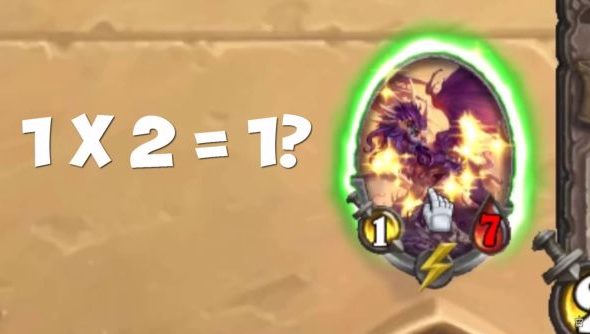 There was a time when bugs fueled game design as much as any deliberate action. From the piles of malformed code that just about held StarCraft: Brood War’s competitive scene together to combos not being an intentional choice in the first fighting games, they’ve sadly grown to be more comedy than exploitable game mechanic as updates have become more regular. Nowhere is this more true than the sprawling design of Hearthstone, where the nigh-infinite interactions are close to untestable and so uncommon as to be not worth the time. Brave, slightly foolish community members are dedicated to uncovering them, however, with great results.

Need something new to play in Whispers of the Old Gods? Here’s our updated best Hearthstone decks guide.

YouTuber Disguised Toast is the most common poster of such things, and delivered for Whispers of the Old Gods in spectacular style:

There’s little I enjoy more than trying to work out how some of these were messed up. On the Forbidden Healing, presumably they forgot to give it the “not affected by spellpower” flag because spells that heal already have it automatically – not thinking about what would happen if it isn’t healing, because the values are set to zero.

The ones affecting 10-cost cards and Deathrattles seem like they’re simply a matter of not putting enough qualifiers on internal card text. It also indicates that the code template for Hearthstone weapons is identical to minions other than where they end up on the board, which is interesting to probably only me.

Others are less guessable. Why is Humility creating a one that, when doubled, still equals one? Toast thinks he’s worked that one out too, giving Scaled Nightmare its own dedicated video as it was behaving strangely with other cards as well. It seems to be an error of sequencing within Hearthstone in how buffs are applied, but why it happened here and not with previous cards with similar effects is anyone’s guess.

Sadly, further experiments with the other bugs won’t be possible as the majority of themhave now been fixed – even the Harbinger which, personally, I thought should have remained ‘bugged’ and had its wording changed to make it a feature.

What are some of your favourite bugs in games? Let us know below, and if you want more Hearthstone, here’s what happens if you overflow C’Thun’s attack value.